Kharma on Returning to TNA: “That Time Has Gone” 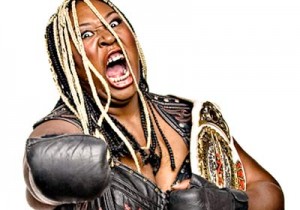 A question on many wrestling fans lips since Kharma was released by WWE is, “Could Awesome Kong return to TNA?”

Well, seemingly, the answer is never.

Diva Dirt recently put Kharma, real name Kia Stevens, in the hot seat and questioned her on many a hot topic, including whether she could step back in a Impact Wrestling ring.

However, it seems that the company has not made contact with one of the fore-founders of their Knockouts division.

When asked if TNA had made contact with her, Kharma said:  “No. No, no, no. None whatsoever.”

However, the former Awesome Kong did express her thanks at the chances she was given by the Orlando based promotion.

She said: “I have to say that WWE is where my heart lies now. I do appreciate the opportunities that were given to me by TNA, by Dixie Carter and Terry Taylor, I really do. I appreciate my time there and it was good, until it wasn’t.”

“Nothing against TNA, like I said, I’m very grateful and they were the ones who introduced me to the US market, but, that time has gone.”

Kharma was a two-time Knockouts Champion during her time in TNA and also won the Knockouts Tag Team Titles alongside Hamada.

You can listen to our full interview with Kharma here.