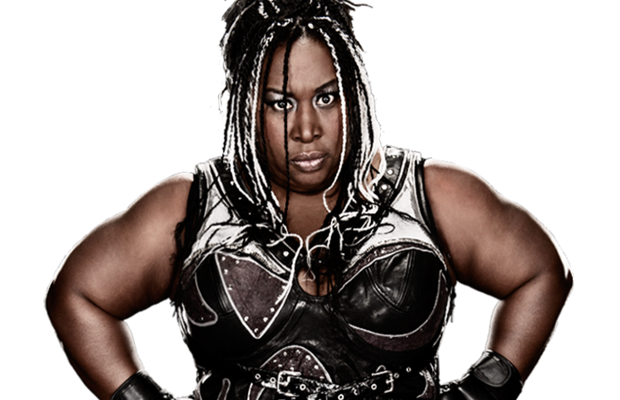 Former WWE and TNA star Kharma recently spoke on the PANDEMONIUM show about Total Divas, feuding with Brie and Nikki Bella, her future with the WWE and her new “Good Karma” project.

Transcript courtesy of Lords of Pain:

Would she be on Total Divas?: “Oh yeah. I totally would have. However, I think- like you [the host, Nani] said- I’m very honest. Sometimes, I’m honest at a fault where I have to act good & edit myself. & I usually don’t because I just find that you feel better when you just live in the moment & be true to yourself. & I don’t know if they could handle me because I’m like the… for real. What’s the name… Teresa Giudice flipping tables? She ain’t got nothing on what goes on in my everyday life ’cause, you know, I go from 0 to 60 in a second if it’s warranted. If it’s warranted & it’s on… where you put on that green light where you cross the line, I’m going to put you in the place. I will turn out the whole building.”

Her thoughts on the Divas Title: “The butterfly belt? I’ve never told anyone this but I actually already have a belt drafted up of what my belt would look like if I were ever WWE [Divas] Champion. It’s badass. I do not care for the butterfly title & it would not go with my persona & I would insist that I have my own damn belt. I would totally push the design that I have it in my head & the vision that I have in my head because I think it would sell like hotcakes in stores. What did you say to do with it? Break it over my knee? I’m throwing it in a fire. [laughs] I’m melting it down. I would seriously melt it down & use the parts for my new belt.”

Plans for a WWE return: “I think the window on that possibility is getting shorter & shorter as the months & years go by. I do have an injury that I’ve been working again… two bulging discs. I am due to get surgery real soon & shave some of that herniation off. We’ll see after that. After that, then it’s very very possible because I’ve been very transparent that WWE said, ‘Get healthy… come back… doors open’. ”

Her short-lived feud with the Bella twins: “It’s awesome that everyone remembers that [how she threatened the Bellas during her last speech on Raw]. It’s always brought up to me. I would love to go back & give them their come-up-in [laughs], even though they’re face right now. But it’s not up to me, it’s actually up to you & your viewers & listeners & what you guys do. People keep asking me when am I coming back. I don’t have an answer for you. I’d be there tomorrow if I could.”

Her new project: “Today, I launched a Kickstarter & your listeners can look it up by going to my Twitter page, @Kharma. It’s a website I’m raising money for, which tracks good deeds. If you were to do a good deed for someone & write down or stamp & you put the stamp on there, they’ll enter your serial number & say, ‘Hey, this person bought me a cup of coffee.’ You’d be able to see how far your good deed goes through my website. I hope someone buys a cup of coffee or gives someone an umbrella who needs it in the rain that turns in to a big tip for a waitress that turns into a great present for Toys For Tots, etcetera, etcetera. So I’m encouraging everyone to do good deeds & help me build the site so we can make this world a little less crappier.”

You can listen to the full interview on VocNation.com.

Check out the Kickstarter for Kharma’s Good Kharma Tracker by clicking here.