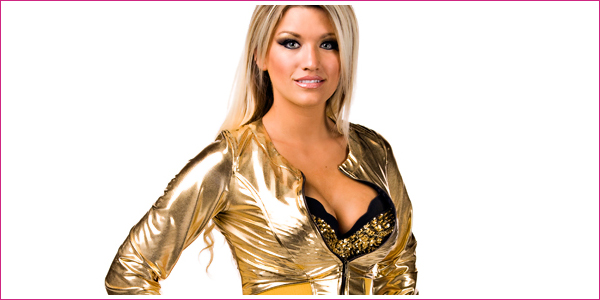 New TNA Knockout, Lacey Von Erich has spoken for the first time since signing her contract with TNA in mid-September. Following her television debut last night, the Miami Herald posted an interview with the third generation star as she touches upon joining The Beautiful People and replacing Angelina Love. Let’s just say Von Erich has some choice words when it comes to the former Knockouts Champion:

“I feel like it was made for me, and she [Angelina] wasn’t a good fit for it in my opinion,” Adkisson said. “. . . I thought that everybody was going to be, `Oh no. Angelina is gone,’ but not one person said that. Nobody really missed her that much. I feel like I can fill the shoes that I’m supposed to.

“TNA told me this role was made for me, and I feel the same way. So when I met the other members, Velvet and Madison, they are awesome. When I got there, we all just felt like we were one group, and the band was completed.

“I’ve never met Angelina before in my life. After what some people have said, I don’t know if I want to. I just feel like we can all be a group together and shine together, so I’m excited about that.”

Hold up… what?! Did She really just put Angelina on blast like that? I’m a little shocked… And as has been discussed in the ‘Impact Feedback’, no I don’t think her comments were in-character because the rest of the interview isn’t and the Miami Herald interviews in the past [including Velvet Sky’s which we posted about yesterday] never give off the impression of being in-character.

Von Erich also touches upon the differences between the Knockouts division and working for WWE:

“TNA is completely different than WWE,” Adkisson said. “The atmosphere and the people are different. I think it’s really competitive in WWE where there is one blonde and then another blonde. There is just so much cattiness, and rumors fly. Candice Michelle told me that. She just got out.

“I didn’t know where girls stood in the business,” Adkisson said. “We kind of are on the back burner, and we pretty much always will be. It’s just a man’s world. I went in there with the mentality that I could be just as good as the rest of the Von Erichs, if they gave me a chance.

“So I’m starting to do my backflips off the ropes, and I’m jumping all over the place, and everything felt natural. WWE was saying, `Wait, you are just a girl. You can’t do all that stuff.’ However, it was really fun once I kind of understood the business today.

“They don’t want the women to be super talented. The girl cute wrestlers they want to stay girl cute wrestlers. Not something like a Von Erich who wants to go out and destroy everything, which is what I really wanted to do. But that’s not why I left or anything.’

Very interesting observations. It seems as though she shares the opinions of many women before her, there is a lot of paranoia in the Divas lockerroom & they never truly know where they stand with management. On the flipside, everyone — including most recently Traci Brooks — has put over how close-knit the Knockouts lockerroom is.

But seriously… those Angelina comments? Really?! It seems Lacey is a little naive as to how the ‘big leagues’ work, I think. Those comments are so off-the-cuff.