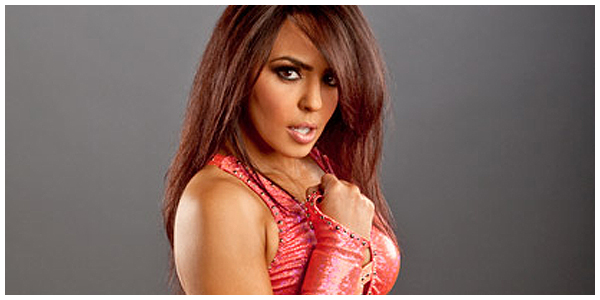 Six Divas locked up in the elimination chamber? Pigs would fly sooner, right? But that hasn’t stop SmackDown Diva Layla from expressing her desire to see the Divas lock up in the lethal cage match. Layla told NZPWI:

* Yes, I definitely think we should see the Divas in an elimination [chamber] match and I know there are plenty of the Divas that’d love to do it.

* And maybe one day we will get the Divas out there. I would love to do it. I would do it in a heartbeat.

Layla also comments on the changing roles of the Divas, saying that they push to compete in more physical matches like the men:

So you think it would be likely in the future if all the Divas got together and went to creative and said “hey, look! We think we could really make a go of it“? Do you think it’s likely?
I think, the Divas pushing that to creative and telling them we want to make a go of it, I think it’s happening already, I think there’s plenty of girls that wanna go out there and do it, whether it’s gonna happen… I don’t know. But fingers crossed, maybe one day there’ll be just that, y’know?

And in perhaps a trifecta, Layla is asked about women being in power in WWE and TNA and how that affects women’s wrestling:

Well hopefully I think it will have a great and positive experience because a woman with power is also going to understand another woman who’s working and wanting to attain that same kind of credibility, that same kind of power, so hopefully it’ll be a positive thing. But also I know, as a woman in power or any kind of woman who’s in charge, they’re going to be harder on the women, because that’s just – naturally we relate to women a lot more easier than, sometimes a man does so I think it’s going to be great, of course! Women can do the same things as men can do, I believe in that a hundred percent. I know society has changed where, y’know, equal rights and stuff like that but sometimes I feel like it’s not right there. We do live sometimes in more of a dominated male world but I think eventually women are going to get better and better and I think women’s wrestling as well. We’re hoping to be taken a lot more seriously in the future.

Really a great interview with lots of topics covered, I have just selected a few to post but Layla also talks about Twitter and the closure of ECW. A very insightful interview and perhaps the first time I’ve seen Layla really have an interview like this. Big thumbs up. Read the rest of the interview here and you can listen to it also.