LCW Roses “War of the Roses” This Saturday: Storm vs. Amazon & More 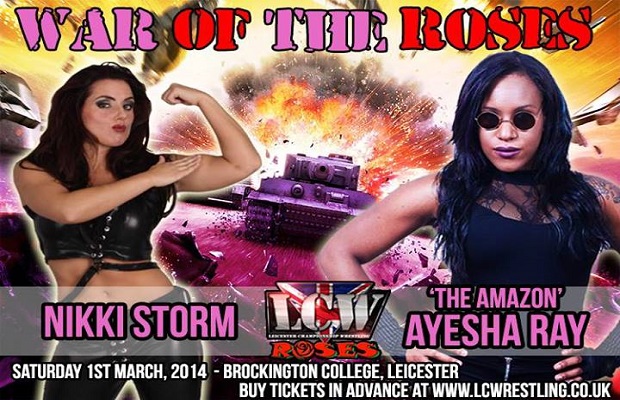 Fresh off the success of their debut show last month, LCW Roses return to Brockington College in Leicester for War of the Roses this Saturday.

The main event sees Nikki Storm face “Amazon” Ayesha Ray in singles action. Storm won the right to headline the show after winning the Roses Rumble last month, but her unfavourable methods in getting the victory meant she relinquished her right to pick her opponent. As such, she’ll be facing the 6ft Amazon this Saturday, much to her chagrin.

In the tag team division, Viper and Jenna teamed up at the previous show, but on Saturday they’ll find themselves on opposing sides as Viper is reunited with her She-X team-mate Bete Noire, to take on Jenna and the debuting Lana Austin. Meanwhile, Violet Vendetta will seek retribution on Nadia Sapphire for turning on her last month, teaming up with impressive newcomer Shauna Shay to take on Sapphire and Faith Lehaine.

Two more women making their LCW Roses debuts are one half of rising Northern Irish duo the Owens Twins, Leah Owens, and Welsh up-and-comer Nixon. Both women, despite their short careers, have plied their trade overseas and will be hoping to get off to a winning start in LCW Roses as they go one-on-one on Saturday.

Finally, two three-way dances will take place at the show. Felony, the enigmatic upstart who turned a lot of heads her way with her appearance at the previous show, will face LCW Roses debutantes Kirsty Love and Freya Frenzy, while Pollyanna Peppers will go up against Sakura Lily and the masked Spanish luchadora Dragonita.

War of the Roses takes place at 3pm on Saturday, March 1st at Brockington College in Leicester, with tickets costing £8.

For more information, check out LCW Roses on Facebook.