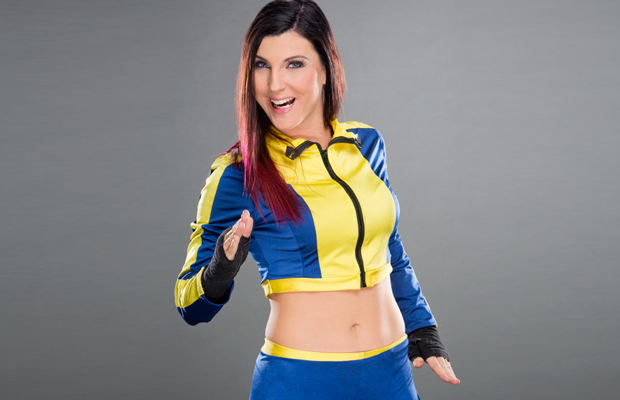 Leva revealed her relatively simple path to getting on the WWE’s radar, having filled out their online recruitment form:

“They have a recruiting page online, and I filled it out and they got a hold of me through that. Actually, my first time I did anything with WWE was being a Rosebud. So when they called me for NXT, I assumed it was another Rosebud gig, which I was all for. Then they told me I was going to be on NXT doing a match. That’s kind of how it went down. They actually called me the day of the show, so thank God I was local. I ended up just leaving Universal and going straight there.”

She was surprised at how quickly the Blue Pants phenomena caught on and gives credit to Carmella for helping to get it over:

“It was definitely unexpected. I didn’t expect to be called Blue Pants, I didn’t expect it to catch on like it did. And then when I got called back the second, and even third time, I didn’t expect for the chants to keep happening. Whenever I get those “Blue Pants” chants, it just blows my mind. I think part of it was Carmella though, whenever her character would be disgusted with me, and then I’d come out all excited, the crowd just ate it up. It really was just right place, right time; the stars aligned, and now the sky’s the limit.”

On incorporating cosplay into wrestling, she admits that deep down, she does it to entertain herself:

“If you watch over the past few years, I pretty much do all my shows in different costumes. When I do the costume, I incorporate aspects of the character into my match. When I dressed as Captain Jack Sparrow, I actually wrestled as I thought he would wrestle, in a drunken master-type style. If I’m doing Spider-Man, I’ll do more agility and high flying. When I’ve done Purge stuff, it’s way more aggressive and angry. That just goes back to the acting degree I have. I just incorporate it all. It’s one thing to dress in the outfit, but to then show traits from that character, that’s different. I’m still Leva Bates, but I can incorporate all these other things as well. Really, as much as anything, I do it to entertain myself, and hopefully everyone else is entertained while I’m doing it.”

She also shed how her side job at Universal Studios has helped her develop as a wrestler:

“Well, if there’s ever a slow period in wrestling, it definitely helps pay the bills [laughs]. But, I perform every day. It’s a great way to get out there and try different things. What will make people laugh? It’s very hands-on, because you’re not just doing shows, a lot of times you’re doing meet-and-greets and signing autographs and whatever else. It’s honestly helped me more in wrestling than I can imagine. Just being onstage, in the public eye, allows me to constantly grow.”

On the possibility of getting a developmental contract, she makes it clear that it’s not the end-all, be-all for her:

“We’ve talked about doing more house shows in the future, which is a lot of fun. I think I’m kind of creating something new with them. I’m sort of a free-agent regular. I can do my things, but also appear on their shows. If they do offer me something though, that would be awesome. If they don’t, that’s still great, because I get to live my dream. I get to work with WWE. That’s always been a dream of mine. I’m just looking at everything positively. You have to enjoy the moment. I could be sitting here concerned about if they’re going to be offering me a contract or not. Instead, I’m enjoying every time they’re calling me. I can say I’ve won a WWE match now! I can cross that off my bucket list. I got to wrestle the NXT Champion! I got be on Raw! Cross all that off my bucket list. Instead of worrying what comes next, you have to enjoy what you’ve accomplished so far. I think so many people, especially wrestling fans, are concerned about what comes next. I don’t know what’s going to happen, I just ride the moment. You never know when it’s going to end. I’ve had an awesome ride.”

You can read the full interview on RollingStone.com.