Lita Comments on ‘Woman of the Decade’ Win 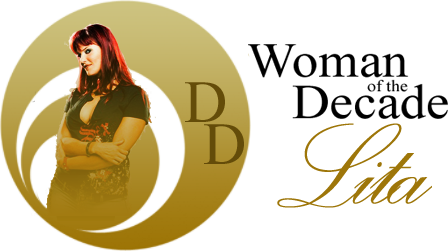 Lita — real name Amy Dumas — mentioned that she was left a lot of messages about her win and seemed surprised that she won, according to a listener who tweeted us about the mention. The former Women’s Champion gave her thanks and joked that she wouldn’t mind a gift card for Starbucks as an award.

A podcast for the show should be available soon so hopefully we’ll be able to listen for ourselves! Even after coming into contact with so many girls in the industry, it’s so surreal to us that Amy would acknowledge the award [even if she didn’t mention the site by name] but it just shows the reach that Diva Dirt has thanks to all of you guys. What a great way to start 2010!

Punkrockalypse airs on Project 9-6-1 in the Atlanta on Sunday nights from 9pm.

Thanks to @Shadowed_Gates on Twitter for bringing this to our attention!