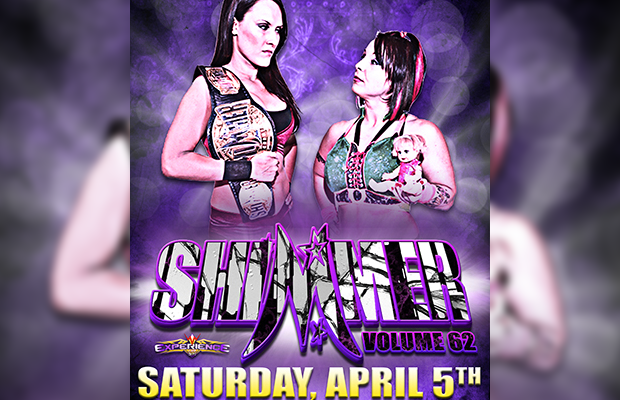 The main event and only confirmed match so far sees Cheerleader Melissa put her SHIMMER Championship on the line against LuFisto in a 2 out of 3 falls match, while other wrestlers scheduled to be on the card include SHIMMER Tag Team Champions Kellie Skater and Tomoka Nakagawa, Mercedes Martinez, Nikki Storm, Madison Eagles and Ivelisse, who was announced last night as a replacement for the withdrawing Barbi Hayden.

SHIMMER 62 starts at 4PM ET (9PM CST) and comes to us from the McAlister Auditorium in New Orleans, Louisiana, and live across the world on iPPV. Click here to order the show.

Nevaeh and Sassy Stephie defeated Heidi Lovelace and Solo Darling. This was a decent opening match, with some great tag work from both teams. Solo and Lovelace have gelled together so quickly as a team, while Stephie and Nevaeh were excellent heels as always.

Leva Bates defeated Veda Scott. A short but solid match with decent back-and-forth offense. Leva got the win with a top-rope Pedigree.

Kay Lee Ray defeated Vanessa Kraven. The best match of the night so far, Kraven really impressive in my first exposure to her, being the Goliath to Kay Lee’s David with some great powerhouse moves. Kay Lee picked up the win countering Kraven’s powerbomb attempt with a sunset flip for the three count.

Ivelisse defeated Kimber Lee. A great performance from both women. Ivelisse continues to set the standard for women’s wrestling today, while Kimber matched her every step of the way. In the end, Ivelisse landed a Code Red for the victory.

Nicole Matthews came and called out Madison Eagles. Looks like they’ll be teaming up to challenge for the SHIMMER Tag Team Championships later on tonight.

Athena defeated Candice LeRae. And the bar is immediately raised. Superb match, which saw Athena win with a beautiful O-Face. Prazak is certainly pulling out all the stops tonight with the booking.

Mercedes Martinez comes out and issues an open challenge for the NCW: Femmes Fatales International Championship. Courtney Rush comes out to answer the challenge, and we have a match.

Mercedes Martinez defeated Courtney Rush to retain the NCW: Femmes Fatales International Championship. This was a war of attrition if there ever was one, both women wearing each other down with submissions. Martinez got the win with a Saito suplex. Great stuff.

Nikki Storm defeated Thunderkitty. This was decent. Nikki Storm is just so damn engaging as a performer, and I’m so glad she’s getting momentum across the pond. I must admit, I really don’t get Thunderkitty, but she held her own in this match. Storm got the win with a Perfect Storm.

Hikaru Shida defeated Evie. Another fantastic match. The pair threw literally everything at each other, and earned the second “this is awesome” chant of the night. Shida got the win with a running knee.

Kellie Skater and Tomoka Nakagawa defeated Madison Eagles and Nicole Matthews to retain the SHIMMER Tag Team Championships.. This is getting ridiculous now, I’m running out of adjectives to do these matches justice. That was brilliant. 3G got the win after hitting The Hangover on Matthews following miscommunication between her and Eagles.

Cheerleader Melissa defeated LuFisto by two falls to one to retain the SHIMMER Championship.. It took twenty minutes for the first fall to take place, with LuFisto hitting the Mangalizer for the three-count. However, Melissa replied in kind just moments later with an Air Raid Crash to level the score. The match continued until well past the half-hour mark, before Mercedes Martinez came to the ring while referee Bryce Remsburg was down, smashed her NCW:FF belt over LuFisto’s head and allowed Melissa to get the pinfall and keep the title. An awesome, awesome match, despite the win in my opinion going to the wrong person, and the finish being a little cheap considering the kitchen-sink-throwing contest we just witnessed. Still, what a show. Not a single bad, or even average, match.

That’s all for tonight! Stay tuned very soon for a full review!