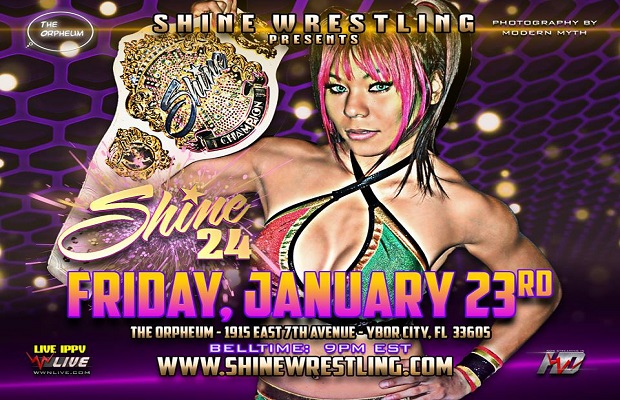 The main event sees SHINE Champion Mia Yim put her title on the line against the recently-returned Santana Garrett, while plum ties on the undercard include SHINE Tag Team Champions Legendary (Malia Hosaka and Brandi Wine) teaming up with their accomplice Thunderkitty to take on The Kimber Bombs (Cherry Bomb and Kimber Lee) and Leah Von Dutch in six-woman tag action, and Allysin Kay‘s hotly-anticipated singles clash with Athena.

The show will also feature the SHINE debut of Andréa (former TNA talent Rosie Lottalove) as the new enforcer of SoCal Val.

SHINE 24 comes to us live from the Orpheum in Ybor City, Florida at 9pm Eastern (2am GMT) and live in iPPV. Click here to order the show.

Amber Gallows defeated Amanda Rodriguez. The Bullet Babe, accompanied by husband Doc Gallows at ringside, was on vicious form in this match, not pulling any punches, and picking up the win with an STO.

Solo Darling and Luscious Latasha come out for a singles match, but Valifornia, accompanied by new enforcer Andréa, interrupt and suggest a tag team match between BTY (Marti Belle and Jayme Jameson) and Darling and Latasha.

Marti Belle and Jayme Jameson defeat Solo Darling and Luscious Latasha. This was a fun match, with BTY dominating for large parts, but Solo Darling was the star of the match with a incredibly entertaining and energetic performance that is sure to have won over a number of new fans. In the end, however, BTY with their Valifornia cohorts at ringside were too strong, with Belle and Jameson winning with a brutal double powerbomb.

After the match, Andréa came to the ring and continued the beatdown with a huge spinning rack bomb.

Out come Valkyrie, and Allysin Kay cuts a promo saying the group plan to reestablish their dominance tonight. Leva Bates, Athena and Jessica James come out, and we’ve got a singles match between James and Taylor Made.

Taylor Made defeats Jessica James. A slugfest, with Jessica James putting up a brave effort on her SHINE debut. Made got the win with a running neckbreaker.

Leva Bates defeats Su Yung by DQ. A good match that got a nice amount of time, with Leva getting the DQ victory after Yung locked in The Purge and refused to let go despite Bates having the ropes.

Allysin Kay defeats Athena. An awesome, awesome match, exactly what you’d expect from these two incredible wrestlers. Kay got the win with a discus clothesline after interference from April Hunter.

The Kimber (Leah) Bombs (Kimber Lee, Cherry Bomb and Leah Von Dutch) defeated Legendary (Brandi Wine, Malia Hosaka and Thunderkitty). Another brilliantly entertaining match, with Legendary using the referee’s limited scope of vision to their advantage and generally using sly tactics. In the end, however, it was the makeshift Kimber (Leah) Bombs who would get the win with Leah Von Dutch hitting the KLM on Thunderkitty.

Mia Yim defeated Santana Garrett to retain the SHINE Championship. Rounding off a clean sweep of great matches this show, Yim and Santana went all the way, putting on a definite match of the night contender. Yim won the match with her package piledriver, but Santana can be extremely proud of her performance.

Afterwards, Santana’s former partner Amber Gallows came and the pair brawled to the back. Then, Valkyrie ran in and sneak-attacked Yim, with Allysin Kay reiterating her declaration of Valkyries dominance…only for Jessicka Havok (!) to return and drive Valkyrie out of the ring!

That’s all for tonight’s show – a surprisingly short one, at just under two hours. Check back later this weekend for a full write-up!