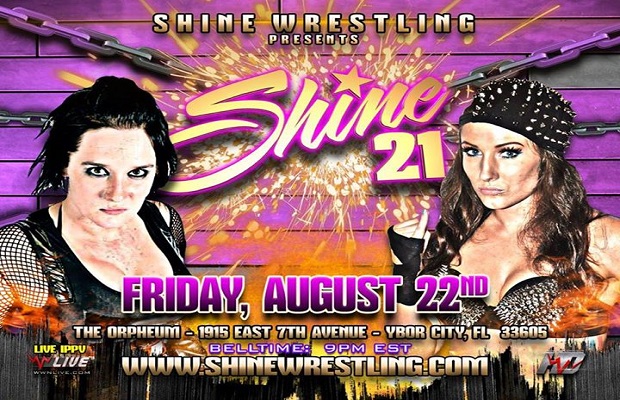 Topping the card is the climax to Allysin Kay and Jessicka Havok‘s titanic, almost year-long feud, with the pair facing off once and for all in a Dog Collar and Chain Match, with Kay’s Valkyrie accomplices barred from ringside.

Also, Ivelisse will defend her SHINE Championship against the winner of a Four Corners Survival Match earlier on in the show – either Amazing Kong, Nevaeh, Leah Von Dutch or Su Yung.

SHINE 21 comes to us from the Orpheum in Ybor City, Florida at 9pm Eastern (2am GMT) and live on iPPV. You can order the event by clicking here.

The show begins with Lexie Fyfe inviting former SHINE Champion Rain to the ring and giving her an honorary SHINE Championship belt to commemorate her 14-year career.

Nevaeh defeats Leah Von Dutch, Su Yung and Amazing Kong to become the number one contender for the SHINE Championship. April Hunter is dragging Su Yung around with her like a possessed pet. The three smaller wrestlers spent much of the match making sure Kong didn’t get a look in, keeping things between each other. Yung shone in this match, staying in the ring for a good chunk of its duration and hitting some impressive moves, including a senton onto Nevaeh from the outside. A few minutes into the match, So Cal Val appeared at ringside, seemingly to do some scouting. Kong finally entered the ring, hitting an Implant Buster on Von Dutch but was quickly taken out by the other two competitors before she could act on it. The match finished when Nevaeh hit a Death Valley Driver on Von Dutch for the three-count.

Solo Darling and Heidi Lovelace defeat Jayme Jameson and Amanda Rodriguez. Rodriguez was drafted in to replace Marti Belle, who had a car accident earlier today. She put in a good performance with her makeshift partner, but the Buddy System were too much for them in the end, hitting You’ve Got a Friend in Me on Rodriguez for the win. After the match, Darling and Lovelace indicate that they’re after a shot at the SHINE Tag Team Championships.

Thunderkitty defeated Justine Silver. Silver is a real bundle of energy, zipping from rope to rope and trying to keep Thunderkitty grounded, going for sneaky rollups. However, Thunderkitty locked in a sleeperhold with bodyscissors, blocking Silver’s airways and giving Thunderkitty the submission win.

Kimber Lee and Cherry Bomb defeat Sassy Stephie and Jessie Belle. A fun match that saw the SNS Express keep Kimber in the ring for large portions of the match, and when the hot tag to Cherry Bomb is finally made, the referee doesn’t see it. They end up with the last laugh, however, as confusion between Stephie and Jessie in setting up their finisher allows Kimber to hit a Swanton on Jessie to get the win for the Kimber Bombs, and cement their status as babyfaces in SHINE. After the match, they too gesture that they’re after the tag team belts.

Taylor Made defeated La Rosa Negra. A rare singles match in SHINE for Taylor Made, who showed no signs of nerves against Negra, who has impressed greatly in recent months. A fast-paced match, Negra almost had the win with a diving splash but the pin was stopped by April Hunter. Negra’s enforcer Noemi Bosques went after Hunter, but missed and took a low blow, before Hunter passed some brass knuckles to Taylor, who proceeded to knock Negra out for a truly heinous victory.

Malia Hosaka and Brandi Wine defeated Leva Bates and Mia Yim to retain the SHINE Tag Team Championships. A great match which saw the Lucha Sisters dominate for vast periods, it looked almost certain that we would see Bates and Yim win back their titles, until all of a sudden Thunderkitty appeared with one of the belts and took out Yim, allowing Legendary to retain. After the match, Hosaka, Wine and Thunderkitty continued their attack before the Kimber Bombs came out to make the save.

Ivelisse defeated Nevaeh to retain the SHINE Championship. An incredible match that saw Nevaeh give it everything and then some against the Huntress, almost winning it in the first ten seconds after hitting a backpack stunner for a two-count. After the referee was accidentally taken out, Nevaeh hit Ivelisse with a thunderous release German suplex and had the match won, but the referee couldn’t make the count. When he came to, Ivelisse hit the Code Red for the win, but Nevaeh will feel like she more than deserves a rematch after everything that transpired.

Jessicka Havok defeated Allysin Kay in a Dog Collar and Chain Match. Just…wow. The stipulation meant that both women remained in close proximity to each other, keeping it exciting with plenty of choke holds. Havok had a beautiful stretch muffler synched in at one point, and later on both women almost knocked each other out with the chains wrapped around their fists. In the end, Havok got the win with an Air Raid Crash through a table. A superb match to end Havok’s SHINE tenure.

Havok cuts a promo putting over SHINE and all the wrestlers, then we see her being congratulated backstage by the faces of the roster. As she leaves the venue, Su Yung spits mist in her eyes and the rest of Valkyrie pounce, taking Havok out as the show fades out.

That’s it for tonight! Join us later on for a full review!