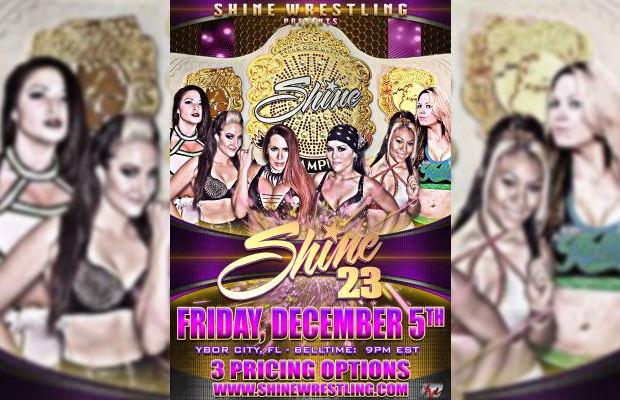 The main event sees the brand new SHINE Champion Mia Yim defend her title for the first time against Nevaeh, while topping off a stacked undercard, the SHINE Tag Team Championships will also be defended, as current titleholders Legendary (Malia Hosaka and Brandi Wine) go up against the Kimber Bombs (Kimber Lee and Cherry Bomb).

Last month’s title match in China where Mia Yim defeated Ivelisse for the SHINE Championship will also be shown during the broadcast.

SHINE 23 comes to us live from the Orpheum in Ybor City, Florida, at 9pm ET (2am GMT). You still have time to order the event, which you can do by clicking here.

The show began with a replay of Mia Yim’s victory over Ivelisse in China, where she became the new SHINE Champion. A fun match with a godawful, deadly silent crowd.

Lenny Leonard welcomes Mia to the ring, and she tells the crowd that she plans to defend the title and raise the prestige of the belt. Out comes Ivelisse, who is less than impressed after losing the title. Looks like seeds of a heel turn possibly being planted. Anyway, we’re ready for the first match of the show.

Ivelisse defeated Amanda Rodriguez. This was a short, decisive statement of intent from Ivelisse. Rodriguez put in a good effort, but Ivelisse had a lot of frustration to vent and she did so in resounding fashion, making Rodriguez tap out after just a few minutes.

Amber O’Neal and Luscious Latasha went to a no-contest. The match was thrown out after former SHINE talent (and O’Neal’s former tag partner) Santana Garrett (now TNA’s Brittany) came to the ring to confront O’Neal. O’Neal then announced that she was now called Amber Gallows and that Garrett is now on her hit list. A match between the two was then announced for later in the show.

Allysin Kay defeated Crazy Mary Dobson. Dobson is super-over with the SHINE crowd, and only won them over even more throughout the match with a host of high-risk offense. In the end, however, it was Kay who would get the win with a discus clothesline. Great match.

Marti Belle and Jayme Jameson defeat Solo Darling and Heidi Lovelace. Both teams put in great performances, with some superb double-team effort. Jaymeson got the win for her team by pinning Lovelace with her feet on the ropes for leverage. After the match, the beatdown continued, with Lovelace getting attacked with a chair by Valifornia. She was taken to the back by her teammates selling a knee injury.

Vanessa Kraven defeated Leva Bates. A David-and-Goliath encounter, with the imposing figure of Kraven making a huge impact on her SHINE debut, throwing Bates around and using a number of devastating power moves. I’ve given up guessing what Leva’s costumes are supposed to be of, but I’m sure they’re very good.

Thunderkitty defeated Leah Von Dutch. Thunderkitty had Leilani Kai in her corner, and used her to her full advantage whenever the referee was looking elsewhere. The pinfall would come in the same fashion. A fun match between two well-defined and entertaining characters.

Taylor Made defeated La Rosa Negra. My stream was lagging a lot during this match, so I didn’t get to see most of it. Taylor Made ended up getting the win with a loaded punch (brass knuckles) that saw Negra out cold. Ivelisse (face or heel now? Damned if I know) comes out to make the save and help Negra out of the ring.

Legendary defeated Kimber Lee and Cherry Bomb to retain the SHINE Tag Team Championships. Again, I had some stream lag, but I did see a few cool spots, including an awesome one where the Kimber Bombs suplexed their opponents one on top of the other. In the end, the challengers succumbed to the numbers game as Thunderkitty and Leilani Kai lended their hands to pick up another win for Legendary.

Santana Garrett defeated Amber O’Neal. This was quicker than I thought, but the post-match sure was interesting, as O’Neal went absolutely ballistic, taking out everyone and anyone, including the ring crew. Great stuff, and certainly cool to see Santana make a return to SHINE, no matter how brief.

Mia Yim retained the SHINE Championship after losing to Nevaeh by DQ. A great match for what it was, that saw stiff exchanges of blows, strikes and a beautiful game of one-upwomanship with German suplexes. After an interference from BTY it looked like the title was heading Nevaeh’s way, until Ivelisse showed up and – in full view of the referee – kicked Yim square in the head, causing the DQ. Nevaeh was furious – as was Yim – and the three brawled in the ring, before Lexie Fyfe came to try and calm Ivelisse’s nerves. She was having none of it, however, as she took out two referees before finally being dragged out of the ring by security.

That’s it for tonight’s SHINE coverage. Check back over the weekend for a full review!