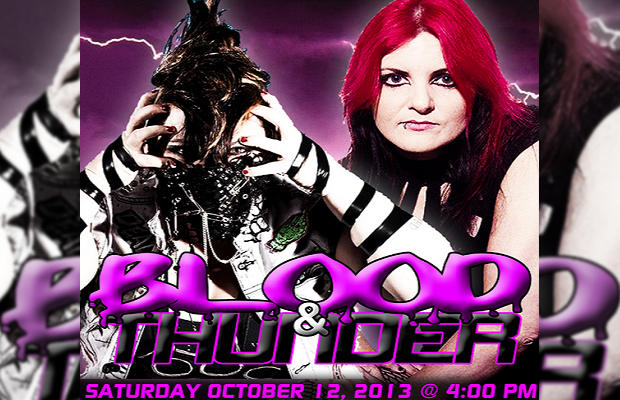 WSU “Blood and Thunder” comes to us live from the Flyers Skate Zone in Voorhees, New Jersey, starting at 4pm ET (9pm GMT). Click here to order the show.

– According to WSU’s Twitter the show will be running late due to hockey running over. The expected start time is now 4:30 ET.

Shanna defeated Leah Von Dutch with a double stomp from the top rope. Solid opener. Chris Dickinson accompanied Shanna to the ring and remained at ringside throughout the match, occasionally interfering in Shanna’s favour. The finish came when Dickinson prevented Von Dutch from hitting a moonsault, letting Shanna in for a brutal double stomp while Von Dutch was in the tree of woe.

Kimber Lee defeated Allysin Kay with a Yoshi Tonic. Before the match, Jessicka Havok came out and cut a promo to Kay, attacking Sassy Stephie for being absent from tonight’s show. The match itself was an excellent, really athletic affair with more reversals than you can shake a stick at, and an exchange of German suplexes to die for. Great stuff.

Mickie Knuckles defeated Saraya Knight. The match was No Disqualification, Fans Bring Weapons. What can I say – that was simply crazy. They didn’t even enter the ring until about nine minutes in! Weapons included tables, chairs, a cookie tray, and a kendo stick that perhaps overserved its purpose at times. Mickie got the pinfall in the end with a sitout pumphandle slam.

Marti Belle defeated Ezavel Suena to retain the WSU Spirit Championship. The match was decent but forgettable, with Belle rolling up Suena somewhat abruptly for the victory. After the match, Suena attacked Belle, then Belle cut a promo on the ring which I didn’t hear because my stream cut out.

Christina Von Eerie and Nevaeh defeated Veda Scott and Jessie Brooks. This was a decent match, with Von Eerie impressing in particular, getting the victory with a lungblower to Scott.

Jenny Rose defeated Nikki Storm by submission. Nikki Storm’s work in the US has been exemplary so far and this match was no exception. Her angry Glaswegian craic works even better across the pond than it does in the UK and she backed up the hype yet again with a superb performance in the ring against a more than up-for-it Jenny Rose, who got the win with what looked like a modified bow-and-arrow.

Jessicka Havok defeated Lexxus to retain the WSU World Championship. Lexxus sure didn’t hold back, going for the jugular right from the off with some vicious strikes and using the size difference between the two women to her advantage, maintaining control for much of the match. In the end, however, it was Havok who would come out victorious, landing the Air Raid Crash for the pinfall.

After the match, CZW owner DJ Hyde came out and announced that he was the new co-owner of WSU. He announced some changes would be made, such as a new WSU website (finally!). As he presents the title belt to Havok, she plants him with another Air Raid Crash and the show fades out as Havok makes her way to the back.

That’s it for our coverage of WSU Blood and Thunder! Check back tomorrow for a full review!