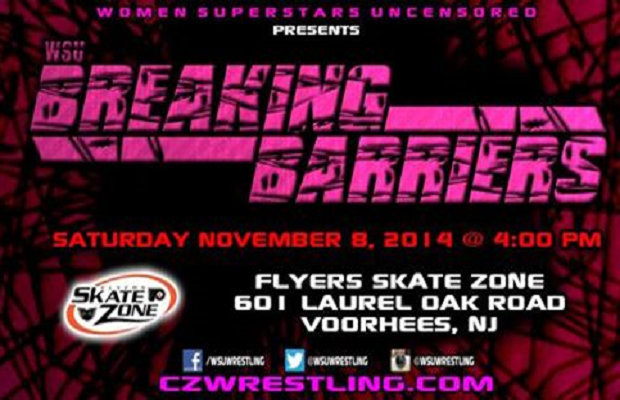 The main event sees LuFisto put her WSU World Championship on the line against Jenny Rose, while Niya defends the WSU Spirit Championship against the debuting Tessa Blanchard. Other plum ties on the card include a rematch between Hania and Athena following their show-stealing performance at the previous show, and an épreuve for C.U.N.T. (Kimber Lee and Annie Social), as they face WSU Tag Team Champions JT Dunn and David Starr respectively in single action – and should they both be victorious, they will be given another shot at the belts.

WSU Breaking Barriers takes place tonight at 4pm ET (9pm GMT) and will be live on iPPV at Highspots.tv. Click here to order the show.

The show was delayed by 45 minutes, which should hardly be surprising at this point.

Nevaeh defeated Jewells Malone. A fun opener, with both exchanging chain holds to start before Malone began to take control with a dragon sleeper. After preventing Malone from using her barbed-wire-2×4, Nevaeh was able to hit a Death Valley Driver for the pinfall.

Sassy Stephie comes out to address the audience, accompanied by Madamoiselle Rochelle and Amanda Rodriguez. Stephie claims to now have a job in WSU management. She first mentions Jessicka Havok, saying that they still have unfinished business. She then turns her attention to LuFisto, and says that she has her sights set on her and her WSU Championship.

Leva Bates defeated Brittany Blake. A short match that saw Leva make light work of her cosplaying counterpart. Blake got some good offense in, including a beautiful missile dropkick for a near-fall, but Leva would ultimately be victorious with what appeared to be a Pepsi Plunge.

Annie Social defeated David Starr. Starr spent large portions of the match taunting social and landing occasional offense, with Social getting sporadic counter-offense. In the end, Social countered one of Starr’s moves with a backslide for the win. A decent match, save for the Holocaust joke that was made on commentary. Jesus.

Cherry Bomb defeats Solo Darling. A pretty routine match for both women that saw Cherry Bomb get the win with the BSE. Decent, if forgettable.

Niya defeated Tessa Blanchard to retain the WSU Spirit Championship. This was a really good match, with debutante Blanchard impressing greatly with some perfectly-executed moves for someone so inexperienced, including a superb backcracker and a springboard tornado bulldog. In the end (and rightfully, to be fair) it was Niya who would pick up the win with a devastating double-arm DDT. After the match, Niya continued the beatdown, only for Nevaeh to make the save and call Niya out, saying that in January the pair will fight for the Spirit Championship.

Hania defeated Athena. Hania starts the action early, taking out Athena before she even makes it to the ring, and the pair brawl at ringside, with Athena swinging Hania brutally into the guardrails then slamming her back-first onto the apron. Counter after counter in the ring, before Hania hits a crossbody for a near-fall. Athena takes control again with various submission holds, followed by a vicious curb stomp for the two-count. Hania comes back into it with a succession of dropkicks, then an inverted DDT for another near-fall. Hania then goes for a rana attempt from the top rope, but Athena reverses it into a massive powerbomb, but again only a two-count. The match goes back outside, with Hania sending Athena head-first into the guardrail and back into the ring, where she hits a frog splash for the win. Another great, great match between the two, and with the scores at 1 apiece now, another rematch seems likely.

Mickie Knuckles defeated D’Arcy Dixon. A highly entertaining match that saw WSU newcomer Dixon show some incredible feats of strength, suplexing Knuckles onto the ring steps and powerbombing her from the top rope. In the end, however, Knuckles was just about too much for her, getting the pinfall victory.

Kimber Lee defeated JT Dunn. That was awesome. Everything Dunn threw at Kimber, she threw back twice as hard. Every strike dealt was returned with a bigger one, every move hit was countered brilliantly, and even the bizarre run-in from Rick Cataldo (let’s not go there) couldn’t take anything away from the match, which saw Lee get the win with a piledriver. With this and Hania/Athena it’s going to be hard to pick a match of the night, especially if the main event lives up to expectations too.

LuFisto defeated Jenny Rose to retain the WSU World Championship. This match went all over the place, with Rose taking the match to LuFisto from start to finish, throwing her into the guardrails and attacking her from all directions. LuFisto picked up the win in the end with a double underhook sitout powerbomb. After the match, the pair embraced, only for Stephie to return to the ring with her cronies and beat LuFisto down to end the show.

That’s it for tonight. Come back tomorrow (if the replay is up by then) for a full review!