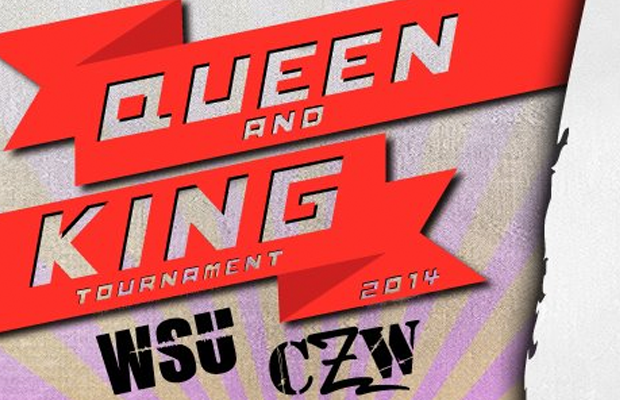 Alongside the seven-team intergender knockout tournament, the card also features two important title matches, as Barbi Hayden defends the NWA World Women’s Championship against Nevaeh, while LuFisto and Athena face off in a 2 out of 3 falls match to decide who will win the vacant WSU Championship.

The WSU Queen and King Tournament comes to us live from the Flyers Skate Zone in Voorhees, New Jersey at 4pm ET (9pm GMT). Order the iPPV at CZWiPPV.com.

Angie Skye defeated Angelus Layne in an Uncensored Opportunity match. There seemed to be no love lost between these two women, as they traded obscenities throughout the match. It showed in the ring too, with the match being highly aggressive. Skye picked up the win with an Unprettier.

After the match, exiled WSU Spirit Champion Niya entered via the front as a paying spectator and sat at the front row, accompanied by the ‘Boy Diva’, Rick Cataldo.

Following that, the presentation of the WSU Queen and King Trophy took place, with all the competing teams posing in the ring with the prize. DJ Hyde then took the microphone as the ring clears, presenting the new WSU Championship belt, and declaring that his teammate Sassy Stephie will be the next champion after whoever wins in tonight’s main event.

Shanna and Chris Dickinson defeated Sassy Stephie and DJ Hyde to advance in the Queen and King Tournament. Well there goes Hyde’s “chosen one”. This was a decent, fun match, though featured more storytelling between Hyde and Dickinson than the two women of the contest. Shanna got a hot-tag late in the match after a long period on the apron to counter Stephie’s Kiss My Sass attempt into a Dragon Suplex for the win.

Candice LeRae and Joey Ryan defeated Shelly Martinez and JT Dunn to advance in the Queen and King Tournament. First time I’ve seen Shelly Martinez in a while, and she had a great match, as did the other three competitors. The crowd popped huge when Candice LeRae kicked out after Dunn’s elbow smash. The finish came after Candice hit Dunn with a Balls-plex followed by a superkick from Ryan and a reverse rana from Candice for the pinfall.

Jenny Rose defeated Hania. This was to settle the dodgy finish that happened at the last WSU iPPV. Both women seemed to want to get an early win, with pinfalls being made seemingly after every bump. No complaints here. In the end, Rose won with a Pedigree.

After the match, Jenny Rose issued an open challenge to any Joshi legend to challenger her at the next WSU iPPV in July. As this happened, Niya came from over the barrier and attacked Hania at ringside. Rick Cataldo then got involved, and Kimber Lee and Drew Gulak came out and challenged the pair to a match.

Mickie Knuckles and Matt Tremont defeated Jewells Malone and Danny Havoc in a No Disqualification match to advance in the Queen and King Tournament. The match was restarted as a No DQ after initially ending early via double countout. Mickie shone as expected in this match, tossing Havoc through a chair at ringside with perfect accuracy and taking yet another staple gun to the nether regions. The match ended when Knuckles threw Malone onto Tremont’s knees for the pinfall. A good match, but a little too short. Maybe if the show had started on time…

Barbi Hayden defeated Nevaeh to retain the NWA World Women’s Championship. A solid match, starting with chain wrestling then descending into a brawl. Nevaeh kicked out of being hit with the title belt by Hayden, but couldn’t get up after a Hayden Halo.

Candice LeRae and Joey Ryan defeated Kimber Lee and Drew Gulak to advance to the final of the Queen And King Tournament. This was awesome. Though all four competitors deserve credit for their perfomances, it was the two women who excelled, with some mesmerising sequences timed to perfection. The finish came via a top rope swinging neckbreaker from Candice to Kimber.

Mickie Knuckles and Matt Tremont defeated Shanna and Chris Dickinson. This was super aggressive, all four wrestlers taking stiff strikes and bumps throughout. Shanna was particularly impressive. In the end, Matt Tremont hit Chris Dickinson with a Death Valley Driver followed by a Frogsplash for the win.

LuFisto defeated Athena in a 2 out of 3 falls match to become the new WSU Champion. I’m not sure which I prefer, this or their last one at Mutiny. But either way, this was incredible. Athena got the first fall with an O-Face, and LuFisto leveled the score by making Athena tap to a Trailer Hitch. The final fall was contested in such an amazing fashion, with one spot where LuFisto double-stomped Athena head-first onto the concrete floor actually making me audibly yelp. My internet connection cut out twice during the match and I’ve never been more annoyed in my entire life. Finally, LuFisto hit a Death Valley Driver on Athena to top off a well-deserved victory.

Mickie Knuckles and Matt Tremont defeated Candice LeRae and Joey Ryan to win the 2014 Queen and King Tournament. This was shorter than I expected, but still good. It was going to be hard for anything to top the previous match though. Tremont won the match for the team with a sitout powerbomb.

That’s all for tonight’s live coverage. Stay tuned for a full review!