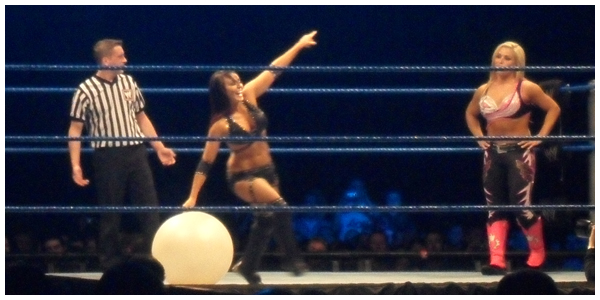 Diva Dirt reader, Hayley sent in the following results and pictures from last night’s SmackDown house show in Belfast, Ireland that saw Layla take on Natalya. Read her report below:

Before the intermission, Kelly Kelly was announced as the guest hostess and she came out to a rather big pop from the Belfast crowd. Tony Chimel then proceeded to bring out Hornswoggle and then gave them t-shirts that were on sale at the merchandise stores around the arena and had them hold them up and model them. Kelly and Hornswoggle then proceeded to throw some t-shirts and wristbands into the crowd before they left the ring.

After the intermission there was then a Divas match and I was like FINALLY!! I have heard reports on how usually during the Diva matches people get up to go to the restroom or concession stand but I honestly didn’t see many people leaving which put me in a great mood. I was right beside the entrance where they come out so I was listening really carefully, and then I heard, “You’re not enough for me!” and everyone started booing, I didn’t really want to boo so I smiled and sang along, while Layla came out. She was wearing her usual ring attire and she had brought out a big white exercise ball which she kicked down the ramp and shouted at people saying not to touch it, she then threw it into the ring and proceeded to pose on the turnbuckles while some type of chant went up.

Then the stunner of the night: Natayla’s music hit!! I was really not expecting her to come seeing as she is listed on the Raw roster but she got a MASSIVE pop and she seemed really excited. She proceeded to high five everyone and got in the ring where Layla was making fun of her. The match started and Layla held up her hand and began to run about the ring with the ball, and then she proceeded to do exercises with the ball. She then taunted Natayla by copying Natayla’s laugh and then some people shouted in the audience so she turned around to shout back at them and when she turned back Natayla had the ball and threw it in Layla’s face which officially started the match.

The match was quite back and forth at the start for a while, but Natayla soon got the upper hand, she even did a body slam and a vertical suplex and she held Layla up there for ages, I was really really impressed. Layla then countered and tried to Irish whip Natayla but she couldn’t move her . Layla finally got the upper hand and sent Natayla out of the ring where she hit the floor quite hard. Layla then posed on top of the turnbuckle and sat there with her legs up pointing down at Natayla. Natayla got in before the 7 count and Layla drop-kicked her down, then she put Natayla in what looked to me like an arm submission move (pictures are attached) and then attached her legs around Natayla’s waist and slapped Natayla while in the submission hold. Natayla countered finally after a huge amount of encouragement from the Belfast crowd and got her down. After a lot of wriggling from Layla, Natayla finally managed to get the Sharpshooter on and Layla tapped.

While Natayla was celebrating, Layla ambushed her and attacked her from behind which got quite a lot of heat from the Belfast crowd, and then Kelly Kelly ran down to make the save waiting for Layla to turn around before jumping on her with a Lou Thesz press and they proceeded to double team Layla before letting her out of the ring to walk down the aisle with a tight grip on her championship. Kelly and Natayla hugged and celebrated before giving high fives. Natayla came over to our side but stood a bit back and just thanked us guys for cheering and she said something else but I couldn’t hear.

It was overall a good night for the Divas and this match was right before the main event which I found absolutely brilliant! I have attached some of the pictures of the Layla vs Natayla match for you all.