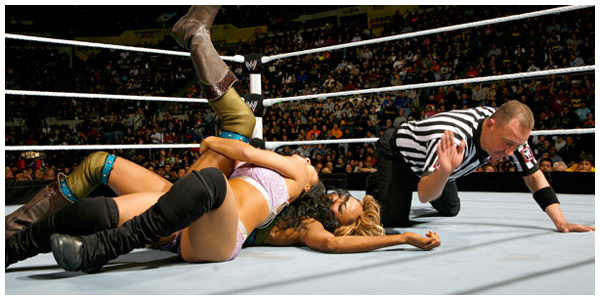 This week on Superstars, we finally get to see her doing something other than entertaining the guest hosts – it will be Gail Kim taking on Alicia Fox in a battle between two former champions. Can Alicia outfox Gail, or will she eat defeat? (I’ll leave the jokes up to David!) Let’s find out.

Out first is Alicia Fox in her brown and blue gear, looking sassy as ever. It’s now that I realize there’s a new commentator beside Lawler, who’s name is Scott. As I watch and listen to the match, I have to wonder where they got this man. He’s as wooden as…well, as a piece of wood. I mustn’t be too harsh, and honestly I tune out the commentary during the women’s matches anyways. Gail Kim’s music hits and tonight she’s in her light purple gear, which she looks stunning in. I must say the extensions look very good on her. She gets a good pop from the crowd as she makes her way into the ring.

The bell rings and the two lock up, jockeying for position. Gail winds up forcing her against the ropes. The referee breaks them up, Alicia shoving her face and smirking. Another lockup, Alicia getting Gail into a side headlock, then flips her over to the canvas. Gail reverses, wrapping her legs around Fox’s neck. She manages to break this hold only to be taken down once more by an arm drag. Gail holds onto the arm, but as the two get to their feet, Alicia breaks the hold by kicking Gail in the back with her strong legs. She hits a few forearms before whipping Gail into the corner, but Kim counters with a flying crossbody into the pin. It gets two.

Gail tries to mount some offense but Alicia cuts her off, hitting her with a modified back breaker. It’s at this point it looks like Miss Fox almost had a wardrobe malfunction, as we see her tie something around her neck. Whoops, almost had a Janet Jackson moment there! Alicia hits a beautiful northern lights suplex into a bridging pin, but it’s good for a two count only. (And I hear Scott say that she just hit the tilt-a-whirl backbreaker….oh to have heard the production commentary for that mess up…) Fox hits a back bodydrop on Gail, then calmly stalks her victim as she crawls to the ropes to try and get to her feet. Alicia ties Kim up in the ropes and puts a knee to her back, pulling back on her hair until the referee’s count forces her to break the hold. She repeats, following it up with an elbow to Gail’s back.

While on the mat, Alicia drives her knee into Gail’s back once more but Gail manages to power out of it. However, she gets tagged by the tilt-a-whirl back breaker (correctly named this time), but it’s a bit sloppy. The resulting pin gets a two count. Alicia whips her opponent into the corner but Gail manages to dodge the in-coming Fox and counters with a powerslam. She goes for the pin but Alicia kicks out. Kim hits some nice hard kicks, then a running dropkick. She hits her running bodyslam into Alicia’s midsection, sliding out of the ropes. Alicia knows what’s coming, however, and hits a forearm. As she goes to ram her shoulder into Gail’s midsection, Gail jumps and comes down hard, squashing Fox into the second rope.

At this point, Alicia rolls out of the ring and attempts to leave, but Gail’s having none of it. She grabs Alicia by her weave and throws her back into the ring. As she re-enters, Fox hits a hard knee to the gut, and pulls her out into the ring for another northern lights suplex. Gail resists and pulls out the Eat Defeat from nowhere. She gets the three count and the win! Huge applause from the crowd as Gail celebrates, whilst Alicia shoots daggers her way.

Musings: Great to see Gail in the ring! It’s probably a nice break from her, as she still gets paid no matter what her role is, but us fans miss her in the ring. She works well with Alicia and tonight was no exception. Minus the sloppy back breaker from Alicia, there was very little to criticise about the match. It would be nice if the WWE would take a page from the Jillian Hall/Bella Twins feud and start up a feud on Superstars between two various Divas. I think Gail could work with anyone and should they find themselves needing to turn her heel, it could start on Superstars and have the final turn done on Raw. But for tonight it was good to see these two in the ring.