Looking Back at WrestleMania 24 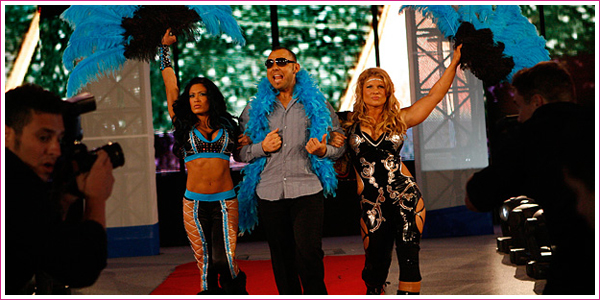 Tonight’s ‘Miss WrestleMania’ 25 Diva battle royal has been a major talking point at Diva Dirt for the last month. But last year, it was the BunnyMania match that had us all talking. Let’s take a look back at last year’s event, which featured Beth Phoenix and Melina beating Maria and Ashley:

WrestleMania 24 is in the history books, folks! And you know what? Despite my initial scepticism *coughunderstatementcough* about BunnyMania, it wasnâ€™t as bad as I thought it would be! Join me in looking back at the match:

Despite the â€œBunnyManiaâ€ tagline, this one was pretty much a normal tag team match and the Diva lumberjacks didnâ€™t offer much to the match itself. Though it was fun to see the likes of Victoria and Mickie at ringside. Itâ€™s unfortunate that they didnâ€™t send Torrie out there too, I for one am saddened she has broken her record of WrestleMania appearances. One Diva that I noticed was missing, was Eve. I donâ€™t think she was missed though! Some honourable fashion mentions: Eve looked really pretty in her dress, Mickie looked unusually glamourous and beautiful, Layla looked extremely hot too!

As for the Divas involved, Ashley looked as per usual but despite the spotlight being on her tonight – what was up with Maria? I donâ€™t know what kind of look she was going for but it was all kinds of wrong; it always makes me laugh when WWE tries to make out how fashion-forward Maria is when really, her fashion tastes are laughable. Once I got past the horror of her hair and moved onto the outfit, the first thing I thought was: â€œThis was obviously inspired by Melina.â€ Mariaâ€™s attire was just like a bad version of Melinaâ€™s unique, well accessorised, polished-looking outfits that Iâ€™ve been a fan of forever! Beth didnâ€™t look any different than usual either; but I love that one Diva truly gets the grandeur of WrestleMania – Melina looked frickinâ€™ smokinâ€™ head to toe! Wow, wow, wow! Needless to say, I loved it! Melina pulled out the stops at WrestleMania 23 for a special addition to her ring attire and this year, she outdid herself. The peacock feathers were unique and fun and her wrestling attire, while in a similar style to her usual outfits, was just gorgeous! I loved the colours, I loved everything about it. Okay, I should save something for the Fashion Focus piece I need to write after this post!

Read more including thoughts on the match, high points, low points and most importantly – who I voted the Most Valuable Player of BunnyMania after the cut:

As I wrote in the intro, I was totally surprised that this match wasnâ€™t the major botchfest that I was expecting. That said, I would have preferred a Womenâ€™s Championship match or at least Candice in Ashleyâ€™s place (more on her royal trashness later). But all in all, I was pleasantly surprised and somewhat impressed. The inexperienced Maria really held her own the best she could against her opponents and put on a sufficient effort, to make this match passable. I have to commend her on that, despite her rushing to her usual moveset – if she could retire the Bronco Buster, I would be forever grateful. Maria, good job. Sure, sheâ€™s no Mickie James but we got what we were given and Maria did make an effort and that should be recognised.

All in all, Maria was batting for both players in her team during this match as given too much in-ring time, Ashley had the â€œskillsâ€ required to defile this match. Ashley, thank God had one of her better days and wasnâ€™t her usual self in the ring. Keeping her ring time limited was a good thing and only helped the match get past itâ€™s 8 minute mark and finish without too many botches. Ashley was just slow, if I had her timing I would never get out of bed, Iâ€™d be stuck on â€œsleep.â€ While she did pull off a pretty exciting facebuster-smash-thing from the middle rope on Melina, the execution of it and pretty much all her other moves was just slow. And the fact that on several occasions she had to stop what she was doing to get her hair out of her face makes me think she should just go bald.

As for the other team, Beth and Melina carried the match well and though I was a little disappointed to see Melina â€œdoing the jobâ€, she got her some too! Thereâ€™s not much to say about Beth, she does what she does and she has the skills to execute her moves properly. What I love about Melina is that she has such flare in the ring, sheâ€™s unique and fun to watch and that was definitely on display at WrestleMania. Melina truly embodies what it takes to be a Diva and is often underrated amongst the likes of Beth, Mickie and Victoria. This girl has the â€œit factorâ€, that electric chair drop-moonsault spot was, in my eyes, a WrestleMania moment for the Divas. In previous years, thereâ€™s never really been one move by a Diva that I could see highlighted in video packages for years to come – this was it!

Overall, the more talented Divas prevailed in what was a shock to me. With the Womenâ€™s Championship not on the line, I didnâ€™t see the booking logic in having Beth and Melina win but God, am I grateful for it! It really does go to show that despite driving us Diva fans crazy in the long-run, they can do whatâ€™s right for business when it counts the most.

And now, who have I voted the MVP of BunnyMania? Well in case you havenâ€™t gussed by my constant praise of herâ€¦ itâ€™s Melina! Honestly, of all the Divas, Melina is the only one that truly captures the essence of WrestleMania. She knows itâ€™s a big deal and she brought her A-game and I can totally see what she was doing and I loved it. From dressing for the occasion to a â€œWrestleMania momentâ€ spot during the match, Melina pulled it out of the bag. Not to mention that she is now 2-0 at WrestleMania! Letâ€™s hope itâ€™s a streak that continues!