Love & Sky: Why TNA is Better 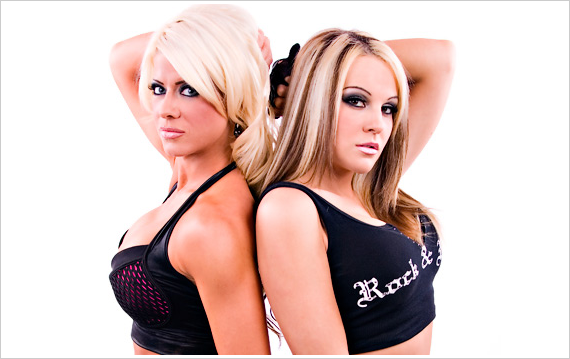 Velvet Sky and Angelina Love were recently interviewed by the Miami Herald, speaking on a range of topics, but mostly focusing on the state of women’s wrestling. Obviously, with TNA’s reputation of spawning butthurt wrestlers, one has come to expect a few potshots at the WWE when it comes to TNA interviews. However, despite the predictable shots taken by Love and Sky, they do have valid points. Here’s a selection of quotes:

‘The women’s division in TNA definitely sets us apart from any other form of women’s wrestling because we offer something called variety,” Sky said. “None of us looks exactly the same. There’s blonde hair, dark hair, red hair, no hair.

The Beautiful People took it to a new level, working well together in the ring, on promos and during interviews. They improve, and the TNA women’s division is improving, attracting more fans.

Love: ‘There’s some aspects where it’s like, `This sucks,’ because it’s all models, and this is brutal, brutal, brutal, but then you can watch us and be like, ‘Oh my God. Those girls actually know how to wrestle.’ It’s crazy.”

How can the TNA Knockouts division better itself?

Love: “As long as the girls don’t give up and everybody tries their hardest and just progresses and learns and works as hard as possible, it can only get better.”

Sky laughed, “As long as everybody stays off the runway.”

Can women’s wrestling compare to the men?

Sky: ‘It already has. Before the Knockouts division, I would say, `No,’ because look what the prime focus of the competition of women’s wrestling was. It was bra and panties matches. It was lingerie. Swimming pools, Jell-O matches, pillow fights. That will not compare to any form of men’s wrestling.

Okay, I’m not here to be the WWE’s white knight, but I felt compelled to respond to a few of their points:

• I think the “OMG models aren’t wrestlers” claims get pretty tired and old, because many of the Divas have proven that that sort of background doesn’t always inhibit their ability to develop ring skills. It’s not the same as laboring in the indies, but I thought we’ve sort of grown past that.

• TNA does have a lot of diversity, I’ll give them that. But who’s to say that there’s that much more in TNA than WWE? They’ve lessened their stock of blondes (yes, I’m using an inventory metaphor, sue me) as of late, and with the likes of Melina, Lena, Layla, Victoria Crawford, and company running around, it’s not exactly a sea of Barbie dolls running around. I definitely think that the Divas could stand to differentiate themselves in the ring, though. Melanie and I mentioned this in last week’s Diva Dirt Sheet. Creating unique images is something every Diva should work towards, and there are plenty of Divas who are far too lazy in that department.

• I actually think the WWE’s moved away from most T&A matches lately. Most every girl is wrestling in legitimate matches, and if you haven’t watched ECW in the past few months (I know I haven’t :P), you wouldn’t have seen the pointless dance-offs they used to have. It’s gotten A LOT better, IMO. Maybe TNA has something to do with that.

• On that note, perhaps they gave the WWE a kick in the butt pertaining to the Women’s Division. If that’s the case, I thank TNA. But I’d respect them a helluva lot more if they didn’t sound so whiney half the time. TNA is infamous for declaring their uniqueness and independence, while at the same time hiring WWE castoffs and pushing them ahead of their own homegrown stars. If they stopped making side remarks and bringing the WWE into most scenarios and REMINDING us that they’re the underdog, maybe they could actually step out of the WWE’s shadow. And believe me, I’m rooting for them to do that. But seriously, move the fuck on, TNA. (Whoa.. I got kind of Ed Norton in “25th Hour” there. Heh.)

I’m probably letting my WWE preference show, but I just get annoyed by constant WWE bashing, when it’s not always warranted. The WWE’s Women’s Division is at that best its been in a lonnnnggg time (maybe ever), and it’s unfair to take potshots at them just because they’re the big dog in the yard.

So, perhaps this could start a discussion: who do you prefer, Knockouts or Divas? Why? Am I alone in being annoyed by TNA’s WWE-bashing, or am I too sensitive about it? Sound off!