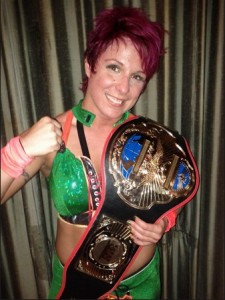 LuFisto is now the first woman in Quebec wrestling history to hold the top title of a promotion’s men’s divison, a feat that she can add to a long list of groundbreaking achievements, such as being the first NCW Femmes Fatales International Champion and being personally responsible for the changing of intergender wrestling laws in the Canadian province of Ontario.

Thoughts: LuFisto has made a career out of bulldozing through barriers without so much as looking back, and this is no exception. She has been an established wrestler in NSPW for some ten years now, and has more than proven that she is capable of matching up with the opposite sex, with several victories over men in the past. A great victory for women’s wrestling, and a tremendous achievement for a tremendous wrestler!