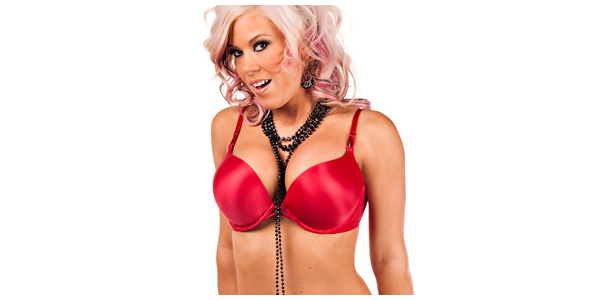 The Knockouts Champion, Madison Rayne has been making the media rounds in the last few days it seems. This time, she speaks to gaming website IGN on a host of topics including TNA’s move back to Thursday nights which kicks off tonight:

As long as we’re still getting our spot on national TV I think everyone in the company’s got something to be proud of. But personally I think it’s a good move to go back to Thursdays. I don’t feel like we jumped back to Thursdays because we were “running scared” like a lot people have been saying. Or because we couldn’t keep up with the competitor. I don’t think it was that at all. Dixie Carter and the office at TNA talked to the fans and reached out to the people who were important and helped, over seven years, put us where we are. For the most part, wrestling fans are wrestling fans, so TNA being on Monday night was going to hurt both companies. Whereas if there’s a night for the other product – a separate night where TNA can shine – the wrestling fans are going to be happy because they’re going to get to see wrestling almost every night of the week now. I think it’s a good move.

Rayne also comments on outgoing TNA Knockout, Tara — her opponent this Sunday at the Sacrifice PPV — who she says she looked up to [along with Trish Stratus] when she aspired to be a wrestler:

When she first came to TNA I was actually her first match and I thought that was awesome. I had still only been in TNA for three or four months and here came one of my idols that I looked up to for years and it was a really cool experience. And over the last year I’ve learned a lot from her. She’s a true wrestling veteran. Sometimes when you meet people that you idolized growing up you’re never really sure if you’re going to get the person that you think they are or if you’re going to get kind of a jaded version of that person because they’ve been through so much in the business. But she’s just got a heart of gold and she’ll always lend a helping hand to anybody if they need it.

And finally, she comments on whether TNA is looking to bring in new Knockouts:

I think they’re always looking and searching. And if the right person comes along and catches their eye they’ll bring them in. I know the independent scene and the girls who are out there and I know that even if there’s a shift of people coming in and going out, and maybe the fans will have to get used to seeing new faces, we’ll be okay. The Knockouts division started in 2007 and it skyrocketed and proved to people that women really could be look at as wrestlers and not just eye candy. I personally don’t think that’s changed. I know a lot of faces have changed over the past few years but I have a 110% faith in the girls who are here now and in the company and their ability to bring in the best names out there.

Click here to read the full interview over at IGN.