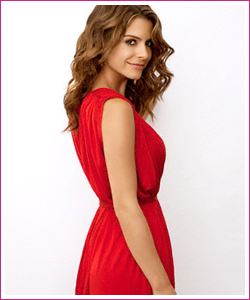 Raw celebrity guest, Maria Menounos has spoken on her stint on Monday night. The former One Tree Hill actress reveals to Boston.com that she requested a chance to wrestle:

“They agreed,’’ Maria told us yesterday, “so I took six training sessions and learned the different moves – the leg drop, the arm drag, the sunset flip.’’

Maria also reveals that she suffered a small injury during her in-ring debut & reveals her idea to team with the ‘real’ Maria, SmackDown’s Maria Kanellis:

“I kind of smashed my tailbone on that flip, but I got some ice on it and I’m fine,’’ she said. “I told Vince I want to come back with (wrestler) Maria Kanellis as ‘The Golden Greeks’ and come out to ‘Zorba the Greek’ music.’’

It really looks like Maria took the opportunity and made the best of it. I surprisingly enjoyed her stint. As a lifelong fan of WWE, Menounos really respected the opportunity given to her by taking the appropriate crash course beforehand, which I think is commendable. As I mentioned in the Redux yesterday, I thought she looked good in the ring and had a great presence. I most certainly wouldn’t mind to see her come back and do a match here & there and the word is that WWE was very happy with her performance and plan to offer her more appearances in the future. Perhaps she could be the ‘celebrity involvement’ for WrestleMania 26?