Melina Blogs About Staying Strong, Being the “Most Controversial Woman in Wrestling” & Online Reports About Her 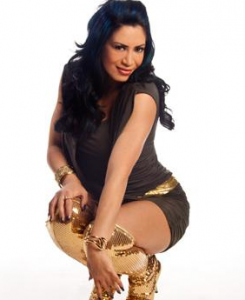 WWE Diva, Melina, posted a blog on her official website discussing negative online reports written about her via wrestling news sites, as well as the controversy that surrounds her.

The former Divas Champion says that she is the “most controversial woman in wrestling,” and perhaps said website think “its easy to throw [her] name around when it comes to drama.”

Read part of Melina’s blog below:

I wanted to touch base on the things being said online… I always choose to ignore rumors and lies. The sad thing is people like to stir up trouble and sensationalize drama. I have and continued to be the most controversial woman in wrestling. It amazes and crack’s me up. The stories I hear of why I have heat and what I supposedly did. It’s funny but then again I really don’t like good people being lied to.

I understand that it’s how sites make a living and its easy to throw my name around when it comes to drama… maybe because I’m strong people don’t think of how it would effect me or maybe because I don’t say anything. Maybe people think, “it’s just a stupid rumor it’s not like it’s going to do anything.” It can alter people’s lives… maybe it’s just the person that I am but I couldn’t imagine ruining a person’s life is worth getting short term attention from people.

I am thankful I am strong. I am thankful I am healthy and of sound mind. I know the truth and so do my loved ones. It just my heart breaks for others. It’s just so sad to see people who want to hate on others to feel good about themselves, hate because they don’t like seeing others happy or because good people make them feel like a crappier one. I get why people talk when it comes to me, it’s part of being in the public eye but how about others out there who aren’t? They don’t deserve to go through people behaving like that.

I wish I could stop the hate that people express to each other. It’s a miserable way to live & see the world. They will never truly love and live life. For those who are being picked on, Stay Strong.

You can read the full blog here.

Melina also published a podcast today, and was interviewed by Canada’s SLAM! Sports.

Thoughts: Melina, as she admits, is perhaps the most controversial Diva in history, with a stockpile of rumors written about her during her six years in WWE. I do personally feel like she’s become an easy target. If you have one bad thing written about you, people who read those sites will find it more easy to believe anything that is subsequently written about you. Just my personal opinion.

Perhaps blogging about it is feeding into the people she’s talking about, but Melina wears her heart on her sleeve and I think it’s commendable that she is using the negativity she’s encountered & trying to send a positive message to her fans and followers to stay strong.