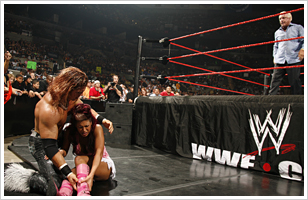 Melina can’t seem to get enough of blog writing these days, because she’s penned yet another one, this time talking about Ric Flair and his recent retirement:

Itâ€™s no secret that my favorite female wrestler/manager/entertainer is Sherri Martel. She is a woman that I love and cherish. I look at what she has accomplished and what I saw when I watched her work. She simply was the complete package. She was one of a kind; original, strong and larger than life.

Amongst the men, there is a single man who fits that mold for me. I looked forward to watching him no matter what he did. He is an incredible man that will stand alone in wrestling. So unique and captivating. He is the one, the only, WWE Hall of Famer Ric Flair.

Ric Flair is beyond the complete package. There are people in this world that are amazing when it comes to mic skills, are incredible wrestlers or just have a phenomenal look. Ric Flair has all of the above and then some.

If you didnâ€™t see the Hall of Fame ceremony, you need to see it for Ricâ€™s induction. The man you see that is so passionate, caring, loving and thankfulâ€¦ Thatâ€™s THE MAN. That is Ric Flair. He is THAT incredible of a person.

In the ring, in the locker room, on the mic or wherever he was, he sucked you in no matter what he did and made you FEEL. To be able to touch an audience emotionally and connect with them is an incredible thing and not just anyone can do it.

Some people have IT and some people just donâ€™t. IT is something you just are. You canâ€™t learn it. You canâ€™t work up to it or buy it. Ric has that IT factor. He has presence like no other. He is extremely charming and charismatic. OH MY GOODNESS! The man is oozing with IT.

Just watch him. You will know what he is feeling or feel it when you look at his face, or hear his voice or his giggle. The man commands attention without trying and he is just the sweetest, most fun-loving person you will ever meet. One that stands up for what he feels and believes in.

Ric Flair is SO incredibly entertaining; very creative and very visual. I love his entrance, the music, the clothes/gear, his facial expressions, the things he says, his intensity and his passion. He is in a category all his own. No one can ever touch what he has done and his contributution to sports-entertainment.

The man never claimed to be an angel. He took some paths along the way that Iâ€™m sure he wished he didnâ€™t go down. We all have. And through everything, Ric always has the greatest of intentions. He lives life to the fullest and has fun. He never fails to make everyone around him smile.

Each person has their path to walk in this life and Flair strut down his path like no one ever could. Right or wrong, whatever happened in Flairâ€™s life is just what was meant to happen. I wouldnâ€™t want him to be any different than the man he is today.

Every wrestler goes through tough times. There are so many obstacles and life-changing moments in a personâ€™s wrestling career – having to fight for your existence in wrestling, earning your spot, being original, people wanting you to fail, travel headaches, money situations, family and love while you have to be gone on trips all the time. Itâ€™s not easy. Sometimes a person has to struggle and fight to be strong through all this, while at the same time you’re trying to find yourself or hold on to who you are.

Through all the hardships and negativity … through all this time … Ric Flair has shined like no other. No one can entertain the crowd like he can. He didnâ€™t need all this hype and commercialism that they do for people nowadays to get you to like him. It was all Flair. Itâ€™s him. Itâ€™s everything he is and does that you respect and you are drawn to. The people love him and will continue to stand by him. He did it by being himself, having fun and loving what he does. He simply is naturally great at it.

I really hope I worded everything correctly in this blog. I still feel like I havenâ€™t said enough about what a great guy and what an incredible entertainer Ric is. No one can replace or come close to what he is and what he has done. Triple H was right in saying the “Nature Boy” deserves his own wing in the WWE Hall of Fame. He is the brightest star and is in a category of his own.

No matter how much I write, this blog will never say how much love, admiration and respect I have for Ric Flair. I canâ€™t thank him enough for what he has done for me and for this business.

I always loved the line, â€œTo be the man, you have to beat the man.â€ Ric Flair, you are a legend. An icon. You are THE MAN!

With so much love for you and your family,
Melina