Melina Responds to “No More Splits” Line on Raw 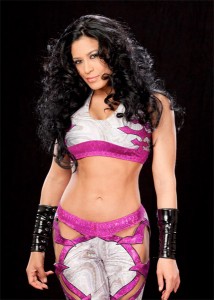 Former WWE Diva, Melina, responded on Twitter to what seems to have been a parting shot directed at her by WWE on Monday Night Raw.

During Beth Phoenix‘s promo following her match with Eve, she said: “No more booty popping, no more splits and no more stinkfaces.”

The splits are, of course, widely associated with the recently released Diva.

Of WWE’s reference to her, Melina wrote:

Can’t say anything to my face as usual. This is funny. That’s WWE making a statement. They know the fans want me back.

PS- Any Diva can try to do a split from here on out but what the WWE confirmed is that the SPLITS will always remind the world of me. Thank you.

I love the statement peeps! I bet the powers that be were waiting all night to hear that line go on air. Hee hee. I find it very flattering!

Thoughts: Until tonight, WWE has never really acknowledged released talent on television, so I guess Melina should be flattered that she made an impression enough on WWE for them to take a jab at her through Beth. And yes, I do think it was a jab. While technically it is true that we won’t see the splits anymore because Melina is gone, I found that by lumping Melina’s splits with moves like the booty pop and stinkface, WWE tried to denigrate the trademark entrance as ‘fluff’ to take a jab at Melina. Unlike the booty pop or stinkface, Melina’s splits were part of her entrance and weren’t part of the match for T&A purposes.