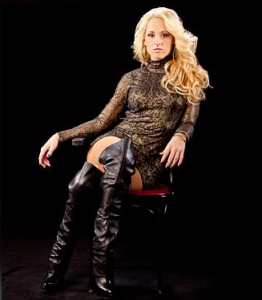 The first ever Divas Champion will face off with Layla this Sunday at Extreme Rules in a ‘Loser Leaves WWE’ match. It’s reported that the match could serve as her exit from the company.

McCool joined WWE in 2004 after competing in the Raw Diva Search. Despite losing, she was signed to a contract and has outlasted all of her fellow contestants with over six years on the WWE roster. She is also currently the longest serving Diva on the roster.

Michelle became the first ever Divas Champion in 2008, followed by becoming the first ever woman to hold the Divas and Women’s Championships in 2009. Last year, she unified the two belts making her a triple history-maker.

Thoughts: There’s also a similar report floating around credited to PWInsider.com. If true, it’ll be sad to see Michelle leave but I’m sure she has her reasons. No doubt — despite being a certainly controversial figure — Michelle will be recognized for years to come for her accomplishments in WWE. I wouldn’t be surprised if, like Trish Stratus, she will pop in for the occasional appearance too. Of course, it remains to be seen how this will play out, so stay tuned…