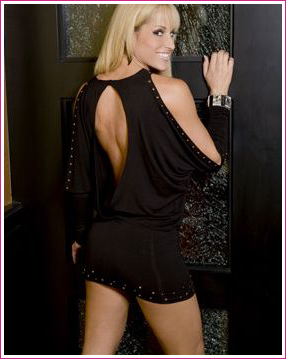 The reigning queen of blogging, Michelle McCool, has just posted another new blog, via her WWE Universe account. It’s the same fashion as before, shoot style blog meets character blogging, or as McCruel likes to call it “Inside” & “Outside” of the ropes.

For those of us still reeling in from Victoria‘s untimely departure, this blog is a sure bet to put a smile on your face – I know it did on mine.

“The future belongs to those who believe in the beauty of their dreams!”

“What lies behind us and what lies before us are tiny matters compared to what lies within us.”

“You canâ€™t build a reputation on what youâ€™re going to do.”

Hey guys! I’ve been thinking long & hard about exactly what to say in this blog. As promised, I am going to continue to give you the Michelle McCool “Outside the ropes” & the Michelle McCool “Inside the Ropes sections. The problem is I have so much to say and only so much space to say it! Soooo….forgive me if it’s hard to follow today, I’ve got a lot on my mind.

Michelle McCool “Outside the ropes!”:

Friday night was a bittersweet night for me (and many of you as well)! As you are probably aware, Victoria decided to retire. After 9 years, several runs as the WWE Women’s Champion, and countless hearts that she has touched, Victoria left a legacy behind….one of hope, one of courage, one of heart and one of character!

Though we’ve had our differences on tv, she is someone very special to me. It’s funny how life goes full circle. From watching her on tv as Godfather’s “Head Ho”, to kicking her butt in diva dodgeball :) to becoming her opponent, her ally, and most importantly – her friend, I absolutely love that girl to death! She is brave, happy, hilarious, courageous, the list goes on….I can’t even do justice what she means to me. The great thing about her is that I guarantee every person she’s met, she has made a positive impact on in some form or fashion!

Ok, ok…….enough of the sappy stuff, it’s time for…

Michelle McCool “Inside the ropes!”

As Victoria leaves, the show must go on. One down, several more to go. I can’t help but to think that my beating her had to do with her retiring, but I guess that doesn’t matter anymore now does it? The only problem now is that there aren’t any ‘true’ competitors left.

Sure, Maryse is the Divas Champion, but I find it no coincidence that she supposedly got “hurt” the week after she stole my title. It’s funny how I didn’t notice her limping around last week when I saw her. Speaking of Maryse….

I have a bone to pick with JR. During my match with Victoria, he had the audacity to say that she (Maryse) and I look and act a bit alike. Other than the blonde hair, there are ZERO similarities and I mean ZERO!!!! I was going to confront him next week because of how irate I was until I read his latest blog here on wwe universe. In his blog, he said one of the smartest things (and what should be obvious to most) he has ever said. And I quote….

“It’s just Michelle McCool’s world and the rest of us are living in it!”

He is absolutely right! So JR….I wholeheartedly forgive you for the comparisons you made between Frenchie and me! And on that note….it’s time to go to work. Let the McCruel Era continue….

Until next time…faith to fight the good fight, heart to believe and soul to search within!