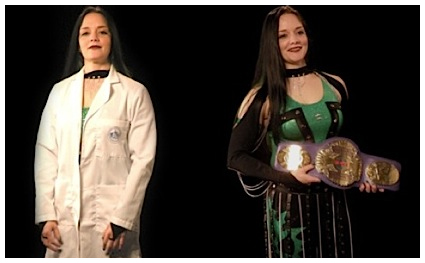 In a rare glimpse into her real life, SHIMMER Champion MsChif will be appearing in an documentary webseries called ‘The Secret Life of Scientists’ for PBS’ online outlet, NOVA. As many know, MsChif has a whole career outside of pro wrestling as a microbiologist. A new blog from one of the producers of the ‘Secret Life’ series, Susan K Lewis, discusses how she reacted to finding out that MsChif — who we learn is Rachel in her everyday life — was also a pro wrestler.

What do PBS’s premier science program and the ChickFight women’s wrestling tournament have in common? Before last week, probably very little. But on Friday, a green-haired goth wrestler named MsChif swept into our production studio to be interviewed for NOVA’s Web series “The Secret Life of Scientists.”

In my 20 years at NOVA, I’ve met many interesting scientists–intrepid oceanographers, Nobel prize-winning physicists, my childhood idols Jane Goodall and Carl Sagan. Never, though, had I encountered a professional wrestler / microbiologist like Rachel, whose ring name “MsChif” only hints at the stunts she pulls during matches. (In one infamous brawl with a 270-pound wrestler known as “Amazing Kong,” MsChif disqualified herself by spitting an “illegal” green mist at her nemesis.)

I must say that the violence in MsChif’s brand of wrestling, no matter how theatrical, is not exactly my cup of tea. Still, I was charmed when Rachel sweetly explained to my ten-year-old daughter Sophie (whom I brought to the shoot) that her science, which involves testing antibiotics, helps doctors to find the right kinds of medicines to get people healthy. And I smiled when Rachel said she never felt intimidated about pursuing science and math, as so many girls do.

Ultimately, what I like about Rachel’s alter-ego is that she shows–in an overt, over-the-top way–that scientists indeed have other pastimes and passions. They are artists, jugglers, extreme athletes, culinary adventurers, and knitting enthusiasts. One of them is even a fierce, green-mist-spewing professional wrestler.

Showing an unexpected side of science, I think, is part of the appeal of this series. It also may be one of the reasons why “Secret Life” has just been honored with a Streamy Award as the Best Reality or Documentary Web Series of 2010.

When the second season of “Secret Life” premieres next fall, you can meet not only MsChif but 15 other intriguing people, including an MIT string theorist who pilots gliders, a neuroscientist/cheerleader, and a psycholinguist/speed demon. And if you have ideas about other scientists and engineers who would make good “secret lifers,” please let us know.

MsChif has always been a little private about her ‘real’ life [and name], so it’s interesting to see both of those sides of her finally come out. I guess there’s no better way to do it than on a TV show! Looking forward to seeing this in the fall.