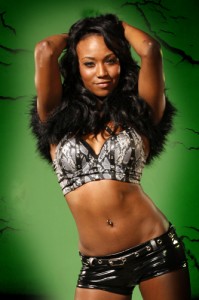 FCW has crowned a new Divas Champion in Caylee Turner.

Turner won the belt at a live event Friday night in Melbourne, Florida.

Head trainer for the developmental territory, Bill DeMott, confirmed the news via Twitter: “New #FCW Divas Champion @WWECayleeTurner !!!!! What a show we are having!”

With the victory, Turner ends Raquel Diaz‘s title reign, which recently became the longest in the championship’s history.

This marks Turner’s first championship win. She is perhaps most well known for her stint on WWE Tough Enough, where she placed fifth in the competition overall. Since the reality show wrapped up, Turner returned to FCW where she has been performing ring announcing duties and participating in various matches on live events throughout the state of Florida.