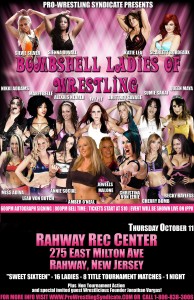 The company’s debut show was to air live via Internet pay per view, but the live broadcast has since been axed.

The reason for the change is because “the iPPV stream for our 9/14 show blatantly sucked,” according to PWS on its Facebook page. “It actually sucked so bad that I (Eric) was highly embarrassed watching the replay and immediately instructed our iPPV director to have the provider issue refunds to everyone whom purchased it.”

“That being said, we want things to be perfect and not half assed. We will return to iPPV on Nov 9th. Sorry for any inconvenience for the Oct 11 Bombshells & Oct 12 PWS events.”

Additionally, several talents have been pulled from the show just days before it is due to take place. Perhaps the biggest line-up change is the departure of Canada’s Cherry Bomb from the card. She has been replaced by Mia Yim, who will face Christina Von Eerie.

PWS announced earlier this week that three other talents would not be appearing either.

Ivy Fit has cancelled off the event as she is “taking some time off of wrestling”. Illinois girls Miss Adiva & Scarlett Bordeaux are unable to attend due to travel issues. We apologize for any inconvenience.

The latest changes come after a public spat with former WWE Diva Ashley Massaro, who was one of the first names announced for the show back in July. Massaro was conspicuously absent from a press release sent to Diva Dirt last week; she claims via Twitter that PWS took her off the show, unbeknownst to her, a week before it was due to take place while advertising her appearance. PWS representatives, however, argue that they removed her from the show following an unsatisfactory performance at their event last month.

As of now, the show — card subject to change, of course — is scheduled to go on tomorrow night. The heavily revised card is now as follows:

Fans hoping to catch the show on Internet pay per view will have to wait for a DVD or video on demand release in the near future.