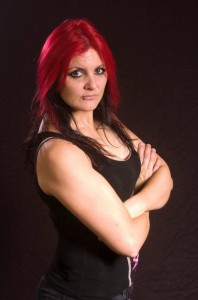 Saraya Knight and Mercedes Martinez have also been added to the tapings of SHIMMER volumes 45 – 48 on March 17 and 18.

It’s particularly good to see Saraya’s addition, as many had speculated that she would be rotated out or not needed without daughter Britani.

SHIMMER says of the addition of Saraya, “On the heels of some of the most memorable battles in SHIMMER history against her own daughter, Saraya Knight brings a career of over twenty years of viciousness to SHIMMER 45-48 on March 17th & 18th.”

As for Mercedes, on the last set of shows, Martinez showed a whole different side to her personality. This culminated in a brutal attack on “The Wrestling Goddess” Athena, in which she injured her leg with a steel chair. Athena was one of the first names announced for the the upcoming tapings, and we’re betting she won’t take the attack lying down.

Front row seating is sold out for the entire weekend, but you can still purchase general admission tickets here.

She’ll be facing off against SheNayNay in singles action. O’Reilly made her debut on SHIMMER’s pre-show SPARKLE in a match against Brittany Force last March.

Wrestling veterans Toshie Uematsu and Ran YuYu defeated Ayumi Kurihara and Kana in 18:44 to pick up the victory… and the gold. Congratulations to Uematsu and YuYu!

Over in Mexico on February 3, for CMLL at the Arena Mexico, Amapola teamed up with the “Las Ladies de Polanco” of Princesa Blanca and Princesa Sugei to defeat Dallys la Caribena, Estrellita and Lady Apache.

Maria Kanellis and Mia Yim have both been added to the list of announced talent for the next Ring of Honor tapings, to be held on March 3 at the Du Burns Arena in Baltimore, MD.

Speaking of Maria, as the creative director of the ladies division in Crossfire Entertainment, she’ll be “presenting” the women’s match between Jessicka Havok and Angel Dust on March 17 at the Fairgrounds Sports Arena in Nashville. Given what Havok has to say about Maria below, could we be expecting an exchange or confrontation between the two at the show?

Former Diva Stacy Keibler hosted the Big Game Eve at The Bank Nightclub (at the Bellagio Resort and Casino) on February 4 in Las Vegas. She wore a cute Alexander Wang mini-dress and Christian Louboutin heels on the red carpet. Her appearance has been covered by OMG! NOW on Yahoo.

In other Stacy news, she’s supposedly being inundated with offers to wear brand-name clothing at more than $5,000 a piece during Fashion Week, which begins Thursday.

In Diva Dirt news, Editor Melanie Rob will be giving an interview for the Wombat Sports podcast today at 4pm ET (1pm PST/9pm UK). Melanie will be talking about women’s wrestling, women’s MMA, the launch of Diva Dirt MMA and the upcoming Pro-Wrestling: EVE “No Man’s Land” Internet pay per view.

Listen to the interview live here.