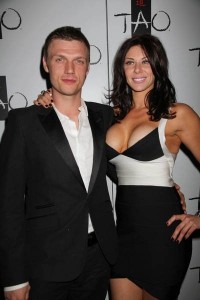 The singer and former teen heartthrob (yes, we wanted it that way) tweeted about his brunette lady love, suggesting she has been in talks with the company on his Twitter account.

He wrote: “Ok @Lauren_Kitt just found out she MAY be a @WWE DIVA. Imagine YOUR GIRL putting the smack down in the ring! OMG i’m so excited! MAKE NOISE (sic)”

Nick continued to express his excitement, adding: “I will have to be at every @WWE show! So excited!!

“FYI this account is verified and I send all my own tweets.That goes for all the stuff about @Lauren_Kitt and the WWE (sic)”

Lauren, it appears, is a fitness model who has competed in WBFF (World Bodybuilding & Fitness Federation) competitions.