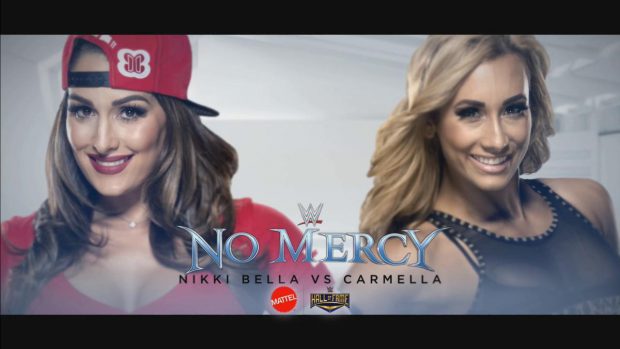 Tonight at No Mercy, Nikki Bella takes on Carmella. Which Superstar will come out victorious in their first singles encounter? The Diva Dirt team weighs in:

Abir: After weeks of Carmella constantly humiliating Nikki Bella, No Mercy will be another one of those events. However, it won’t lead to a Carmella win. I predict that Carmella will either get herself disqualified by using a weapon/the ropes for too long, and completely destroying Nikki. As Bryan made clear on Talking Smack this week, Carmella is more focused on beating up Nikki Bella rather than beating her. This will of course lead to a Nikki Bella win, but due to the DQ finish, I predict that Mr. DB will initiate the No DQ match we’ve all wanted to see at the next SmackDown Live pay-per-view, TLC. And obviously their disliking of each other will have an impact at Survivor Series, where we may see the RAW women face off against the SD women.. So this continuous feud may lead to an unfortunate result at the cross-brand event.

Alex: Again, I’m running this prediction off the basis that Becky Lynch may be injured, which will definitely effect the outcome with this match. Nikki Bella getting the eventual win in this feud to prove her dominance and gain some steam into a feud with possible New Champ Alexa Bliss? I’m here for it! And let’s not forget that a nice victory can add for some great cutaway scenes for E’s “Total Bellas”!

Jack: I can see Nikki becoming Becky’s next challenger, but with Survivor Series coming up soon, a title feud may not be a priority, allowing more time for this red hot feud to continue. I am going to predict a Nikki win, which leaves Carmella enraged with a score to settle in a rematch.

Josue: Carmella has really been making a new for herself over at the blue brand since targeting Nikki upon her WWE return. Still, don’t count Nikki out just yet. I predict that Nikki will finally gain some redemption with a win over Carmella this time around but in the weeks after, Carmella will continue to attack Nikki, this time in a more violent nature thus leading to that eventual teased No DQ match between the two.

Kyle: I’m looking so forward to this match. Carmella has slayed my life and soul reinventing herself as a heel whose sole purpose in life is to piss off Nikki Bella. With multiple attacks on Nikki, Carmella is all but primed for the ass kicking of a lifetime from the longest reigning Divas Champion in history. This feud is going so well, I’d love to see more so I’m pulling for Carmella to win to give Nikki that much more ammo to comeback. Chairs match at TLC, anyone?

Matthew: The Carmella/Nikki Bella is one feud that isn’t gonna end real quickly. This is about putting someone on the shelf while moving up in the world of women’s wrestling. Nikki has that big year last year when she became #1 on PWI’s Female 50, but in some ways people got jealous of her success in and out of the ring. Carmella is one of them, and boy does she want to make a statement to the SmackDown fans that she is the best out there. Carmella will get this win, but somewhere down the line there will be more matches between her and Nikki.

Stephanie: Carmella and Nikki is hard to predict. I’d be happy with either of them winning. However, I don’t see this feud ending any time soon. Carmella is benefiting from working with Nikki and I’m going to make a bold statement and say she’ll win this first one on one match. It’s only fitting that things escalate from here between the two so we eventually get a match with a stipulation at TLC. They both deserve to make history. I think Carmella will win a series of battles but Nikki will eventually win the war.

BREAKDOWN: 3 for Carmella, 4 for Nikki.