No Mercy Predictions: Becky Lynch vs. Alexa Bliss for the SmackDown Women’s title 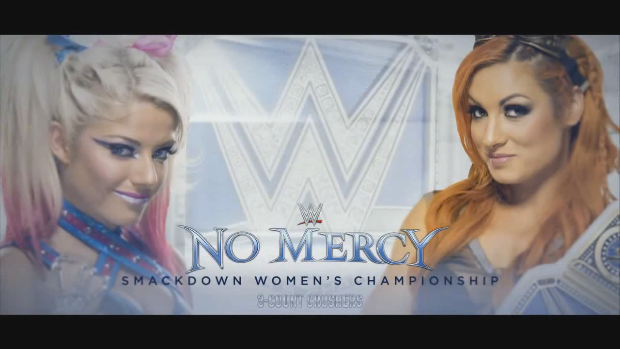 Tonight at No Mercy, Becky Lynch is schedule to defend her SmackDown Women’s title against Alexa Bliss. However, last minute reports suggest that there may be a change up as to how this title match will play out or if it will even take place. What will happen at No Mercy? The Diva Dirt team weighs in:

Abir: I think that Becky and Alexa will give us a similar vibe from the Nikki Bella vs AJ Lee match from Survivor Series ’14. Though I doubt she is gonna make out with her opponent, I feel like Alexa is going to win with an immediate dirty tactic to shock the audience, give herself a good dose of heel heat, and to anchor Becky’s underdog gimmick some more.

Alex: If rumors are to be true that Lynch is injured, then I think this is the moment that they can capitalize on Alexa Bliss for the win! Obviously, it would be heartbreaking for Becky to lose the title so early, but we’ve seen several talents drop the title due to injuries recently. Other than this, I’m all for seeing Alexa take things to the next level and prove that this isn’t a one off mini push!

Josue: It is a bit unfortunate to hear these reports of Becky’s injury coming at the time of her first title defense. Still, I don’t think Becky Lynch will be forced to drop her title and that WWE will somehow work around this by having Becky win via some kind of small DQ or backstage attack to “prevent” the actual match to take place.

Kyle: This match outcome was all but predictable until Becky’s injury last night. Heading into this, I really thought Becky was walking out the winner, but there could be some kinda of wacky segment or non-match in which Alexa can hold the title. Glitter. Glitz. Sparkle. Bliss, the new Champion.

Stephanie: Before a rumored injury made the rounds I was thinking we’d see a hard fought battle between Becky and Alexa. Now, I’m not so sure. I’m hoping Becky will be creatively written off screen somehow until we know more information about the severity of her injury, effectively cancelling the match, or tonight Alexa will be crowned the new champion via dirty tactics, putting Becky out of commission so she can chase the title again when she comes back.