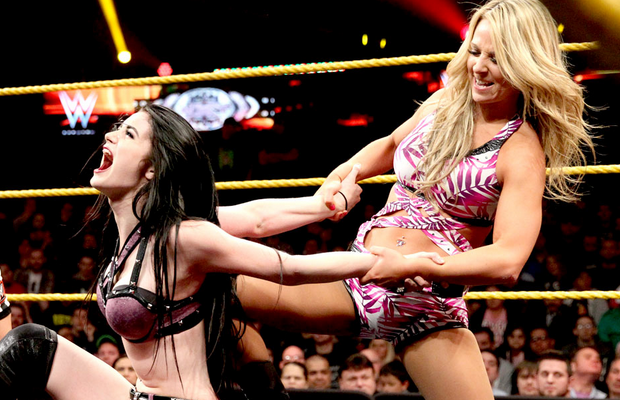 Sorry about the lateness of this review! Though, when we witnessed match like Paige and Emma put on at NXT ArRIVAL, I guess it’s never too late to talk about it. Let’s jump right into it:

From the start, this match was everything I want to see from the Divas. It was given a true “big fight” feel with the video packages and the presence of Stephanie McMahon introducing the match. I’ve said it often that if the WWE doesn’t try to make the audience care about the Divas, they won’t. We’ve seen that proven a ton of times, most recently at Elimination Chamber. Here, it’s the exact opposite: the effort is being given, and thus, the fans truly care. Just listen to the crowd’s reactions throughout the match.

But let’s get to the actual action, shall we? The match starts as an all-out brawl, Paige and Emma tearing at each other like they’re bitter enemies. It finally gains a bit of order when the referee separates them. Paige lands a kick to Emma’s midsection and goes for an early Paige Turner. Emma blocks it, though, keeping her arms hooked into Paige’s and attempting to pull her into a backslide pin. Paige kicks out, but the Divas remain hooked together, standing up in unison and fighting for control.

Emma gets free first and drops Paige to the mat, trying to slingshot her into position for the Emmalock. Paige drops halfway through, though, and turns it into a pin attempt. Emma kicks out. Paige is right back at her, though, dropkicking her to the mat. Another pin attempt, another kick out by Emma.

She hits Emma with a scoop slam and tries for yet another pin. Emma kicks out again, but finds herself in a headlock. Emma tries to twist out of it, but Paige keeps an iron grip, holding on relentlessly, at one point slamming Emma back to the mat from her feet. Emma tries to get to her feet again, but Paige pulls her back down, wrapping her legs around her. Eventually, Emma gets to a standing position and Paige finally lets go, but punches Emma in the back as she does so.

Paige goes for another scoop slam, but Emma slips out of it, landing behind Paige and grabbing her by the waist. Paige heads for the corner, and slips from Emma’s grip, trapping her in the corner and elbowing her in the head repeatedly. Emma drops to the mat and Paige chokes her with her boot, punctuating it with a few stomps. Paige gets a bit distracted by the referee’s scolding, and Emma gets a hold of her boot, standing and pulling her feet out from under her.

Paige, having landed face first onto the mat, crawls to the corner to get her bearings. Meanwhile, Emma does a somersault into the opposite corner, prepping to deliver an Emma Sandwich. Paige stops her with a boot, but Emma just grabs the other boot as well, dragging her out of the corner and again trying for the Emmalock. She gets close this time, but Paige kicks her off.

Paige heads to the ring apron, positioning Emma’s throat against the middle rope. She hits her with a barrage of knees to the head. When the attack is over, a dazed Emma flops to the mat. She’s alert enough to kick Paige’s legs out from under her, though, and sends the champ down hard on her tailbone. Emma drags her back into the ring and goes for the pin. Paige kicks out.

The Divas slowly get to their feet, Paige going for the attack first, charging towards Emma in the corner. Emma dodges and briefly locks her into the DilEmma, letting go on the referee’s count. She hits the Emma Sandwich immediately after, going for another pin. Paige again kicks out. Now it’s Emma’s turn to lock in the submission, as she plants a knee into Paige’s back and stretches her arms backwards. Paige tries to fight out of the hold, going so far as to run around the ring, but Emma’s grip is tight, and she soon gets her seated back into the hold.

Now, Emma plants both boots into Paige’s lower back. Even as Paige falls over to her side, Emma keeps a boot in that spot, placing the other higher up to keep the pressure on Paige’s shoulders. It soon gets even worse for Paige, as Emma takes the move into a surfboard position, narrowly avoiding pinning herself as she takes Paige practically off her feet. Just as Paige starts to regain her footing, Emma lets go of the hold, kicking Paige and giving her a quick landing right onto her face.

Emma goes for another pin, but only gets a two-count. She tosses Paige by the hair into a corner and gives her a taste of her own medicine, choking her with a boot and doing a bit of stomping. Emma tries to pin her again, but no dice. Paige start to show some fire again when she reverses an irish whip, but Emma telegraphs her attack and slips out onto the ring apron. Paige clocks her with a forearm, though, knocking her off her feet. When Emma stands up again, Paige tries to slam her head into a turnbuckle, but Emma blocks it, sending Paige into it instead.

Emma climbs to the second rope, prepping for a high risk move. Paige starts to fight back and looks to be going for a superplex, but Emma regains control, beating Paige down and performing a sunset flip. Paige doesn’t let go, though, and Emma has to fight to get her into the powerbomb position, eventually hitting her with a devastating sitout powerbomb. She pins Paige, but the champ kicks out at two. Cue the “better than Batista” chants!

The Divas slowly but surely crawl toward an upright position. Emma pulls Paige back to the mat for another near fall. She toys with Paige a bit, grabbing her hair and slapping her. Paige returns the slap – and then some. She clotheslines Emma and kicks her hard in the stomach, setting her up for the Paige Turner. But it’s not enough – Emma kicks out! Paige can’t believe it!

With Emma still prone, she tries something else, locking her in an amazing-looking submission (that William Regal informs us is a scorpion cross-lock). Emma can’t handle it, and taps out. Paige retains the title!

Both Divas are emotional after the match, eventually shaking hands and hugging to signal the end of their rivalry. For now, at least..

Thoughts: Wow. What can I say about this match that it doesn’t say for itself? It wasn’t the “perfect” match, but in this day and age, it comes damn near close. When we’re consistently being given short matches with underdeveloped stories in the dead parts of a show (hi, Elimination Chamber!), it’s mind boggling to see a Divas match that builds on a story, is given plenty of time, and is treated with importance. I mean, when’s the last time we’ve heard a crowd react like that to a Divas match?

So much of women’s wrestling in the mainstream depends on those outside factors. You can throw Natalya in the ring and have her bust out incredible moves, but when the match is given three minutes and barely has a story behind it, it’s not going to connect with the crowd. It’s like I said earlier: if you don’t give the fans a reason to care about the Divas, they won’t. Let’s face it: mainstream women’s wrestling is constantly fighting an uphill battle for respect. Many male WWE fans write off Divas matches as “piss breaks” or give so few shits about them that they consistently describe them in spoilers reports as “typical Divas matches”. The WWE treating them as 1/10th as important as whatever John Cena‘s got going on only reinforces that mindset. It’s hard to climb uphill when you can’t get a foothold.

Not only did Paige and Emma’s match have these outside advantages, they got it done in the ring, selling the submissions beautifully and making me believe that the match tapped them of every ounce of their energy. It’s typical of a “big match” to have one or both of the competitors kick out of the other’s finisher, but here it really got me. I was legitimately shocked that Emma kicked out. This, of course, opened the door for Paige to whip out her new submission, which looked fantastic. It looked painful and was impressive from a strength standpoint too. I can only imagine how hard it is for Paige to maintain that hold. It really makes her look like a million bucks.

As much as we lamented the loss of AJ Lee‘s “Trish and Lita“-like foil in Kaitlyn, this match makes me think that we might yet get that dynamic in Paige and Emma. True, they don’t have too many encounters under their belts yet, but I can already see the seeds being planted for a career-long “frenemies” relationship a la Trish and Lita. I, as much as anyone, want to look forward and stop comparing everything to Trish and Lita, but their dynamic is sorely missed in today’s division, and I can’t help but feel some excitement in thinking that we might finally have seen that same spark again.

Unfortunately, Paige didn’t turn heel, but we did see shades of her deviousness. Maybe they’re saving a heel turn for her main roster character? There’s just too much there to cage her into a bland babyface role. Which reminds me: this match bucked the main roster trends in another way, showcasing a baybface vs. babyface match that didn’t hurt either’s character and showed as much fire as any heel/face match-up could offer. That’s another thing the WWE should take note of. Of course, that requires them to have two babyfaces that the crowd loves..

This match gave me a lot of hope, from the hype to the match itself. Even Stephanie McMahon’s pre-match speech gave me hope. She said something to the effect of, “The women can do it as good, if not better than the men.” We all know that to be true, but the question is if the WWE will let that happen. That statement is contrary to the WWE’s apparent intentions, according to many things we’ve heard over the years, like the rumors of Michelle McCool and Melina being scolded for “showing up” the men in their matches. This match proved that the Divas can give it their all and enhance the whole show. There is no need to fear the Divas being “too good” and hurting the men around them.

“The women can do it as good, if not better than the men.” Is that a promise, Steph?