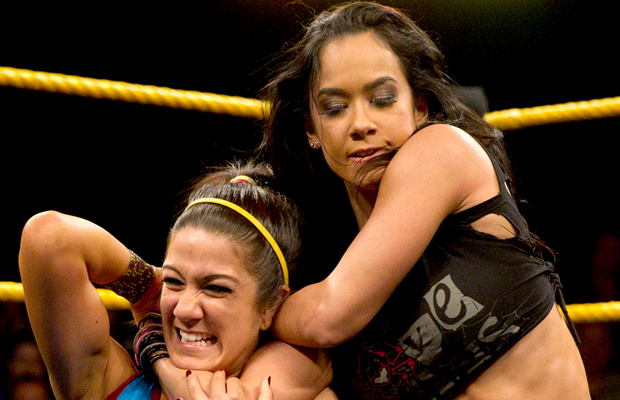 What’s up Diva fans and welcome to this week’s NXT Redux. I’m back, as promised in the Main Event post. Missed me? Probably not, that was only a few hours ago. If you’ve had enough of WWE Divas Champion AJ Lee after she was only just on Main Event, then you’ll be disappointed, as she is defending her Divas Championship on NXT this week. Although everyone is gagging for a Champion vs Champion match vs Paige, that’s not happening this week. AJ is set to defend the coveted butterfly against the woman who has yet to win a match on NXT, superfan extraordinaire, Bayley. Will AJ dispose of her happy-go-lucky opponent with ease or can Bayley pull off the biggest of upsets? TO THE VIDEO!

Out first this week is Bayley, complete with her new-ish quirky music and star on-screen graphics. I guess the stars will have to do for now as she hasn’t got a lot of good moments to stick on the titantron. Oh well. We see her hugging AJ last week in the backstage area before AJ herself (complete with old titantron) skips her way into the Full Sail arena. Bayley is taking majorly deep breaths as Byron Saxton does one of those good old fashioned in-ring introductions. Love those!

The match starts with awkwardness personified, Bayley, trying to hug AJ. The Divas Champ is staring at Bayley like Bayley is the one who invented crazy and she hasn’t got a clue what to do. The crowd tell them to “hug it out” yet AJ decides to pull it out, Bayley’s hair that is. AJ shrugs and raises her arms out (which I found hilarious) before hitting back to back neckbreakers. Following a two count, AJ rams Bayley’s head into the top turnbuckle before kicking her to the floor and then snapmaring her. AJ applies a chinlock before declaring: “I’m hugging your neck now!” As I pick myself up from off the floor, Bayley does the exact same thing, yet she gets knocked back down again thanks to a stiff elbow from Cray-J. AJ rams Hayley’s head into the turnbuckles some more and then charges at her starstruck opponent.

Bayley avoids the contact yet she doesn’t dare hurt AJ! Bayley is unsure of her next move before hugging AJ and then ramming her into the corner. Split personality here or what?! Baylz (as I will now start to affectionately call her) performs a corner clothesline before hitting a major scoop slam. Bayley tries to tire AJ out by pinning her FOUR times in a row along with a knee to the chest and the tactic nearly pays off as AJ us unable to dodge a bazooka-like spinning elbow from the second rope later on. AJ shows off her resiliency though as she kicks out, despite making it look like she had just been shot! AJ gets to her feet and clutches her face whilst she “grimaces in pain”. Bayley looks concerned and is perfectly lured into AJ’s arachnid grasp. Following a spin kick to the gut, AJ hits the Shining Wizard for the win.

Following the match, we see Tyler Breeze backstage with new NXT Diva Lexi Kaufman, who gets her second un-named appearance. Tyler asks if Lexi would like to a picture. She agrees yet he wants her to take a photo of him and doesn’t want her in it. Silly Lexi, thinking she could just take a delfie (duo selfie) with Tyler like that!

Thoughts: This was a pretty short but sweet showing on NXT this week. Bayley’s character is coming on leaps and bounds and I know a lot of people hate it, yet I like it. Without sounding dramatic, her gimmick is like Eugene has had gender-reassignment surgery. She lacks peoples skills and is very starstruck and unlike Eugene, I hope she gets to turn heel at one point and becomes a stalkerish, obsessive fan. I’d love that eventually. And with that, stay tuned, Jack will be back!