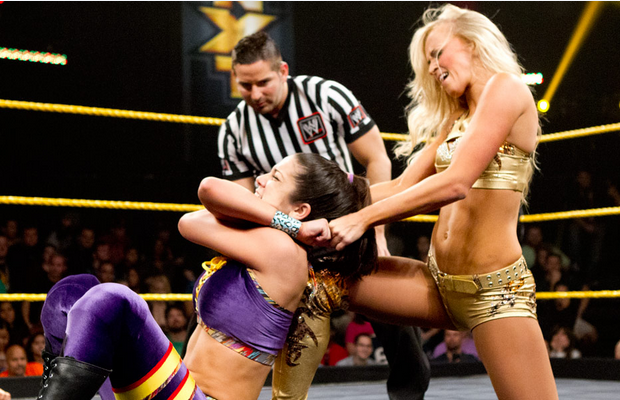 What’s up Diva fans and welcome to this week’s NXT Redux! The yellow-roped brand’s resident nasty girls are making an appearance this week as Summer Rae, accompanied by Sasha Banks, takes on everyone’s favorite hug-lover Bayley, who is accompanied by Natalya. Nattie has still not left NXT, despite not winning whatsoever and rubbing every other Diva the wrong way. Well at least she’s got Bayley. Those two are so genuine, it’s like Bayley and Charlotte all over again. Anyway, let’s get right into the action before I rant more about unrealistic friendships!

Kicking off this week’s NXT are the Divas and out first, it’s the red-hot Summer Rae, who is being flanked by the lukewarm yet rising Sasha Banks! Summer and Sasha get out their matching headbands in order to mock their dinosaur and pogo stick loving rival. Sasha has also ditched the Boss chain this week in favor of a Boss t-shirt. The chain looked like it would make your neck go green if you went into a pool wearing it so of course, the t-shirt is a lot better. I also notice during Summer’s entrance that although Byron Saxton is ring announcing, he is somehow also on commentary and Kendall Skye‘s voice has been dubbed over the video. Maybe Tensai was originally on commentary and they realized how irrelevant he was?

Second to make her entrance is Bayley, who is for some reason being joined by Natalya. Nattie and Bayley teamed up like 3 weeks ago and yet Natalya has still not left NXT. I know things aren’t looking so rosey on the main roster Natalya yet if you’re always losing in NXT, you need to get back to the main roster to keep your spot ASAP! The commentators makes note how this feud picked up steam after Bayley’s headband was broken. Hilariously silly, yet it’s somehow good. Only in NXT!

The match starts out with Summer signalling to Bayley that she also has a headband and that they should hug! The crowd are so into this and are chanting for Bayley not to do it. Bayley takes the fans advice, suckering Summer into thinking she’ll hug her, only to rip her headband off! Summer tries to pick up her damaged accessory and Bayley uses the opening to try and pick up a win with a sunset flip. Summer is furious and wants none of a fired up Bayley! She tries to get Sasha to drag her out the ring yet Bayley drops Summer right on her face. Summer scampers to the corner, kicking Bayley in the chest whilst the ref is in-between them both. The devilish Diva rams Bayley’s head off the top turnbuckle several times before executing her downright beautiful foot choke. Is it bad I find a choking move beautiful?…

“Her poor headband came off!” Summer is such a good heel!

Quicker than a hiccup, Bayley has fought back against her bully, and she wallops Summer’s head off of the top turnbuckle just like Summer had done to her. Summer isn’t in trouble for long though, as she reverses an Irish whip before hitting the same ballet kick/dance facebuster combo that she used against Kaitlyn a few weeks ago on Superstars. Bayley kicks out, and Summer does more ballet-eqsue poses as she chokes Bayley out on the middle rope. Summer then hits Bayley in the face with her behind before wrenching her with a straight jacket submission. Bayley stamps on Summer’s foot to get out and ducks a clothesline before going mental!

Bayley hits a running axe handle before hitting Summer with two clotheslines; one in the middle of the ring and a flying one right into the corner. Bayley’s cherry on top is a spinning elbow, yet it’s only enough to get a two count. What’s better than a spinning elbow from the mat? One from the second rope of course! Bayley tightens her hair bobble and decks Summer yet again. Bayley tries to get the win again yet it’s still not enough. What’s better than a spinning elbow from the second rope? One from… what do you mean she didn’t go to the top rope. Joke fail!

Bayley picks Summer up yet Summer pushes Bayley against the ropes, hoping she’ll rebound and crash right into her devastating spin kick. Bayley keeps hold of the ropes though and Summer spins into dizziness. Bayley hits the Hugplex, which Renee Young will be gutted about as it’s now been re-branded the Belly to Bayley! Out of seemingly nowhere, Bayley has scored a clean victory over Summer! Bayley poses in the ring with a fan to end the segment. Oh no sorry, it’s just Natalya who I forgot was there!

Thoughts: Standard, solid, short and sweet. This match felt really fresh to me and whilst it wasn’t as long as matches normally are on NXT, I really, really enjoyed it. I am loving Bayley more and more each week; her character is evolving in the ring and she’s not always so gullible now when it comes to being goaded into dodgy predicaments by heels, as seen by her playing Summer for a fool and throwing her hairband to the mat. Like I’ve said about Emma before, Bayley is portraying her character excellently, and her work in the matches is allowing her to come across as a believable threat, even though she’s a comedy character mainly.

I would however like to see her only use the Belly to Bayley as a signature move. If she did it off the second rope, I could see it being devastating, yet when performed normally, I’m not so sure. However, it is one of the only finishers around right now that physically goes in hand-in-hand with a characteristic of a character, so I do like that aspect of it.

I also really like Summer and Sasha yet again this week. Summer’s loud and outlandish outbursts are thoroughly entertaining and Sasha is still bringing the sass at ringside. Speaking of ringside though, what was the point of Natalya being there? It’s not even her fault though either. Sasha didn’t interfere at all, making Natalya’s presence utterly pointless as she didn’t have to even the odds. I forgot she was even there until the end. We all know Bayley loves cats so let’s just hope Nattie didn’t mention Gismo around her, otherwise the celebrations won’t have lasted long!