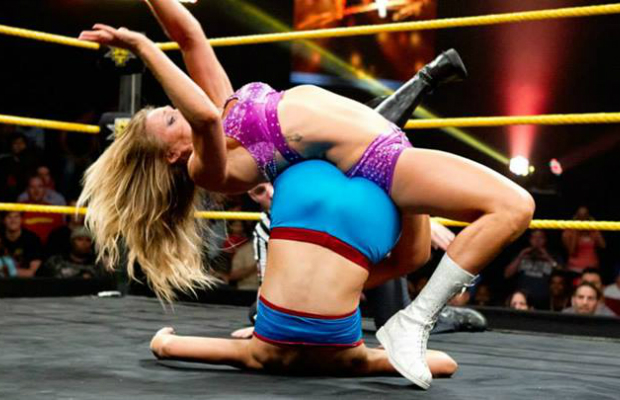 Greetings all, and allow me to welcome you to another one of these here NXT Reduxes. If you walked in expecting to see the finals to our ongoing Women’s Championship tournament, well I’m sorry to disappoint you because that match actually takes place next week.

This time around, we’ve got an occasion that I’ve been waiting what seems like an eternity for, in the debut of none other than Charlotte! I’ve been hearing a lot of good things from live event-goers regarding her performances in the ring, and so it’s finally time to see for myself. She’ll be taking on robot queen, Bayley, which proves to be an excellent selection for someone’s first televised opponent.

We’ll start in three… two… one…

We spot Bayley currently in the ring when she’s happily interrupted by the entrance music of none other than the nature boy, Ric Flair! The crowd erupts so loud that my eardrum feels like it just burst, as Flair steps down the entrance ramp and into the ring.

He grabs a microphone and rallies the crowd up, claiming how proud he is to be here because he both loves this business, the wrestlers who bust their butt to make it, and most specifically because tonight he gets to watch his daughter, Charlotte, make her debut! He introduces her as some upbeat and addicting music hits.

Out she finally walks after all this time we’ve waited, and she doesn’t skip a beat in her entrance alone. She nails a front flip (I’m not a gymnast so we’ll go with that), before sliding below the ropes into a split formation! Charlotte blows a kiss and gives her dad a hug, as he steps out and allows her to get down to business.

The bell sounds as Charlotte slips off the ropes and lets out a “WOO!” Bayley is over the moon to be here tonight, as they lock up and Charlotte applies a wrist lock. Bayley rolls out and applies one of her own, but Charlotte cartwheels through and takes her down! Bayley hilariously smiles to Ric and calls Charlotte the nature girl, before the pair lock up again and exchange holds until Charlotte ducks a clothesline and executes one of the most unique pinning combinations I’ve seen. She dubs it Charlotte’s Web, but Bayley refuses to be entangled as she kicks out.

Bayley with a jacknife for a two count, then into a backslide for another close call. A roll up gets yet another, as her bow has seemed to fall out. Ric now removes his jacket, but Bayley hits a kick and after making sure Charlotte’s okay, nails a beautiful exploder suplex for a two.

Charlotte is now sent into the ropes, but she flips right over and lands on the ring apron! She ducks a punch, slams Bayley’s head into the corner, leaps in, and hits a clothesline! From there, she nails a beautiful flipping driver for the victory as Charlotte reigns supreme in her debut to the delight of her father.

Thoughts: Hallelujah! It’s about time we see Charlotte make her debut. I’ll be honest and say that I loved this match. Bayley consistently amuses me with how flat out amusing she is as she checks on her opponents before hitting moves and walks around with a smile on her face at all times.

Charlotte didn’t get to show too much, but she showed just enough to let us know that she’s going to be a force in this division. Every move was so fluid and unique that I’m practically clamoring to see what else she has in her repertoire, and I completely get that she didn’t show too much because this was her debut and she should look a little newer to make her win even more impressive.

With the more matches she gets though, I’m expecting to see a lot more from her and I can’t wait. A+ Charlotte! Completely made the wait worth it (but you’re never allowed to not wrestle on a taping ever again as I need at least a monthly fix).