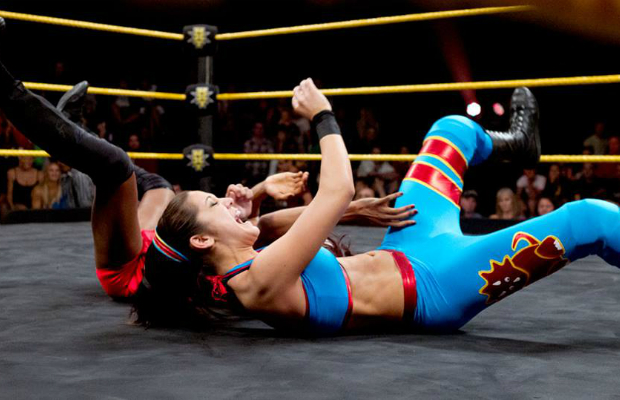 Greetings everyone, and first let me apologize for the lateness (again). I got caught up in some unexpected Fathers Day stuff (for my dad… not me. I’m not a child person) and unfortunately the NXT Redux couldn’t get done in time. Plus, with all the Payback buzz going on, I figured it might get lost in the shuffle and we don’t want our pride and joy of Canada, Renee Young to suffer via overcrowded-ness now do we? I sure don’t.

Speaking of everyone’s favorite piece of interviewing goodness, she’s back this week and talking to none other than… Bayley! Yes, the moment I’ve been begging for through all of these Bayley losses with no entrance has finally been set. Bayley will also be going one on one with Alicia Fox a little later on… and yes, please don’t adjust your spectacles (I feel smart saying spectacles opposed to glasses), Alicia Fox is really wrestling. My excitement level can hardly be contained at the thought of the messiah of all sailor hats making her coveted return, so let’s get underway with the (circle which applies to you after watching) awkward/adorable-ness that is Bayley!~

Backstage, WWE’s own Barbara Walters welcomes Bayley to the interview stage, but the innocent young Diva seems hesitant to step up to the camera lens. So much so that Renee has to actually guide her over. Bayley, complete with bow, states that she’s doing well and she likes robots. Renee is put on the spot for a moment, in what would sure send Oprah Winfrey shivering in her five-thousand dollar boots, by being asked if she likes Bayley’s headband. Never the one to be unprepared, Renee Young admits she does appreciate the power of the bow, and even receives a compliment on her look as a result. Take that Diane Sawyer!

Renee asks Bayley her thoughts on Alicia Fox, which Bayley reveals she actually likes because she’s pretty. Once again proving her hard earned degree in journalism hasn’t gone to waste, Renee is asked if she thinks Bayley is pretty, and the sly fox that she is doesn’t hesitate for even a second in stating that she does in fact find Bayley to be beautiful. Bayley dubs Renee her new friend and reveals that when she’s done beating Alicia, she and Renee will go play robots or jenga or something, which makes me jealous of our resident blond Anne Curry as that’s pretty much what I’ve always dreamed of doing… only now I have to live through her. Renee wishes Bayley luck, as the queen of the headband heads off to prepare for action.

… I seriously just jumped when this video started, and whether it’s because of an accidental loud volume scare or the fact Bayley is getting an entrance, I’ll let you be the judge. Some 80’s Saturday morning cartoon looking stars light up the NXT titantron, and out comes mighty morphin’ Bayley ready for action. She (and her bow. Don’t forget the bow.) makes her way down the ramp and slowly slaps a hand before getting cut off by the party-esque theme of Alicia Fox! The fancy Fox hoodie is swung around for the world to see, as I realize we are truly experiencing a historical face off, in that it’s a battle of the two Divas with the best headpieces money can buy.

Once Alicia drops the hoodie of the hour, the bell sounds and Bayley awkwardly offers a hand shake. Miss Fox obliges, but Bayley pulls it in for a hug that seems to freak Fox out a little. She goes for another, as Alicia elbows Bayley in the chest and goes to town on her with some head bashing in the corner. Fox with the beautiful northern lights, but just for a two count. From there, she gets to working on Bayley’s oxygen level, applying a headlock and sparking the crowd to get behind the (alleged) dinosaur lover. Bayley unfortunately loses her bow somewhere in the process, but she is however able to try and fight out. Fox starts taunting Bayley, but this infuriates Bayley up as she nails a few shots and a monkey flip! Bayley with a few takedowns, getting the crowd really involved as she hits a knee! She scoops Alicia over with a beautiful exploder suplex, however she again can’t muster up the win. Fox rolls to the outside, and as Bayley walks over, she’s met with a kick to the face. Alicia then slides in and nails the Scissor Kick on Bayley for the victory!

Thoughts: Hooray for Bayley character development and Alicia Fox making a rare appearance (not just on NXT, but anywhere)! When it comes to Bayley’s new persona, I feel like you’re either going to find it amusing or be utterly repulsed by it and find it dumb. To me, I think it’s fun and could really do something for her like I’ve been hoping for once the crowd gets familiar with it since I don’t think they saw her promo backstage at the actual show. She’s pretty much the female Heidenreich circa wanting the Divas to become his friend, but MNM crashing the party and getting into a brawl (yes, not the Heidenreich who seemed to try and… assault Michael Cole. I don’t think Renee’s quite ready to experience something like that just yet). I find her to be really engaging when she’s actually competing as well. Lord knows Bayley hasn’t been given anything to work with before tonight, yet the crowd did react to her and cheer her on in the match despite probably being confused with her new persona at first.

It’s not something I can recall a Diva doing gimmick wise, so I’m intrigued with how it’ll play out. I do think it needs a little fine tuning, but that will come in time with the more Bayley gets to work with it. What I absolutely love though is something she didn’t do here, but has been doing on live events, and that’s taking pictures in the ring with partners or opponents where she’s all smiles as they’re either not paying attention or not in the happy go lucky mood she is. What I’ve seen of them really cracks me up, and as a fan of Bayley, I hope that can become a permanent fixture. I can just see some heel knocking her camera away as she goes in for the pic, causing her to become irate and destroy them like a mad woman!

The match came off really well to me, between Bayley getting to show more of her character early on, to Alicia looking very crisp with her and the crowd actually getting involved in something that didn’t contain Emma or Paige. While we’re on the subject, I’m so glad we finally found out Alicia Fox wasn’t being held against her will backstage. She’s been M.I.A. for quite some time and I was starting to fret. Never fear though, as she came back with a vengeance. I have no problems with her beating Bayley and advancing in the tournament because I feel like if they’re going to incorporate the main roster Divas into this, you really do need at least one of them to advance or it makes them all look less when they’re supposed to be considered the goal that the NXT Divas want to become. I also think it makes the whole idea of adding in the main roster Divas seem kind of nonsensical if they’re all eliminated in the first round, and of the three options (Alicia, Tamina, and soon to be Aksana judging from the brackets), I’m definitely glad A-Fox has moved on thus far. I don’t think anyone expects her to win because while I’m all for them moving on to future rounds and while I love Alicia, a main roster Diva being the first NXT Women’s Champion would be kind of silly to me. I’m still rooting for an Emma/Paige final, but I’m excited to see what happens next so job well done NXT bookers.