NXT Redux (June 6th, 2013): The Tourny Begins as the Anti-Diva Evolves into the Diva of Tomorrow 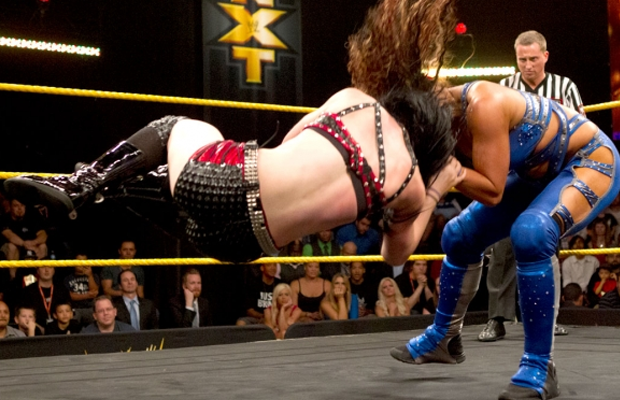 Hello there one and all, and welcome to this week’s NXT Redux! Last week, we were treated to an appearance by none other than Stephanie McMahon, who introduced us all to the debuting NXT Women’s Championship! Not only that, she revealed that a tournament would begin that would pit eight of the current and future Divas against each other with everyone vying to be the last one standing in order to make history as the first ever NXT Womens Champion. You’ve got a lot of favorites in the tournament, but this week we kick things off with one of the first crowd favorites, Paige, as she steps up against the powerhouse Samoan, Tamina Snuka. Does Paige and her experience advantage equate a victory over Tamina? Or will Tamina’s upper hand in the size and stature department guide her to advancement?

There’s only one way to find out, but before we kick things off with the match, let’s all watch the following (amazingly put together) video package, which hypes Paige as she changes her moniker from the Anti-Diva to the Diva of Tomorrow:

The question on my mind after watching this video… someone give me a date where we’ll be watching Raw and return from a commercial break to see it playing on our screens? So good.

Alright, here we go! We get a fancy graphic showing up on the screen which looks to be pinkified (I know pink makes us all think of a certain butterfly, but let’s be appreciative that the title for this tournament looks top notch and give them the satisfaction of airing a pink graphic instead of decking out the belt that way). Up first enters Tamina, who tricks some of the fans into thinking she was about to give them a slap on the hand. We get a first look at the NXT Womens Title, before the entrance of the Diva of Tomorrow who commentary still refers to as the Anti-Diva. Paige walks out looking ready to go as the crowd erupts for her and she enters the squared circle for her opening round match.

The bell sounds as WWE and NXT’s heavy hitters circle around the ring and lock up as both women jockey for position. Tamina shoves her back, but Paige gets a kick to the knee and a big headbutt that doesn’t seem to affect Snuka. Tamina instead opts to hit her own headbutt which sends Paige back into the ropes. Paige begins to get overpowered by Tamina, which is something we don’t normally see around these parts. Snuka with a suplex for a two, but as Paige goes for a roll up, Tamina counters out and maintains the upper hand as she tosses Paige around and applies a choke hold. The fans get behind the Diva of Tomorrow, who fights out briefly until she’s taken back down.

Snuka hits a knee and reverts to a chin lock, but as the fans get behind Paige, she just can’t seem to take Snuka down. A bodyslam by Tamina into a submission hold, as again the fans attempt to rally Paige on. Finally, Paige fights out and backs Snuka into the corner. Oh wow, Tamina decks Paige in the jaw with a huge superkick, as she drags Paige over to the corner and heads to the top rope. Ruh roh… she heads up top and leaps off with the Superfly Splash to the knees! Paige then rolls Tamina up and gets the three count out of nowhere. We then get a look at the brackets of the tournament which will feature Bayley against Alicia Fox, Sasha Banks against Summer Rae, Emma facing Aksana, and me without any Charlotte debut in sight.

Thoughts: Hmm, well I’m going to be honest and say I didn’t really understand this match. We all know Paige is a force to be reckoned with, especially on the NXT roster where she’s been one of the central focuses of the entire show. Not only that, but even commentary put this match over as containing the two toughest Divas in the entire tournament… but if that’s the case, I don’t get why the match was so one sided. I don’t feel like Paige hit hardly any moves until the roll up, which is something I’d expect from someone like Summer or Bayley who it would be considered an upset to beat Tamina. Paige though, shouldn’t really be dominated for the entire time and then have to resort to squeaking out a roll up in order to advance when she’s basically plowed through all the Divas here.

I mean I get that they want to make it seem like Tamina’s above Paige’s level since she’s on the main roster, but I think that could’ve worked just as well with the match being more back and forth in which Paige constantly stays on top of Tamina’s game and causes Tamina to be surprised with how well the “rookie” is able to keep up with her. Even by going in that route, the roll up would make sense because Paige was just able to get one over on her after staying fairly even with Snuka and getting closer to a victory with each pin attempt. I mean I didn’t think the match was bad at all performance wise (especially that crazy superkick towards the end which is definitely my favorite move of the night), but I just didn’t get the way it was laid out in making Paige stay grounded practically the entire match. Nonetheless, I’m excited to see what goes down with the rest of the tournament considering I don’t believe we’ve seen two of the three remaining matches yet so that should definitely provide some freshness in the coming weeks.