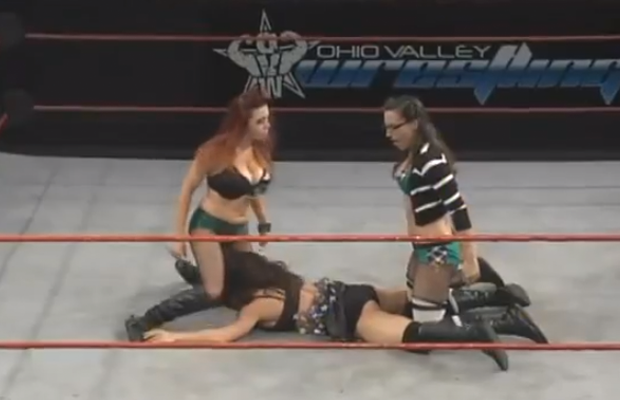 Greetings all, and welcome to your second edition of the OVW Write-Up! Last time we got together, Heidi Lovelace was challenging Womens Champion, Trina, to a match at Saturday Night Showdown in order to stand up to who she assumes is a bully talking badly about Lovelace and Taeler Hendrix‘s friendship if you will. In reality, it’s Taeler herself that’s orchestrating this entire thing and working as the puppet master of sorts to attempt attaining the only thing that seems to matter to her in the OVW Womens Title.

This week, we’ve got… well, instead of spoiling it, let’s get down to business and see for ourselves!

Backstage we spot Nikki St. John and Taeler Hendrix referring to Heidi Lovelace as worthless for failing to capture the title at Saturday Night Special last weekend. Suddenly, they’re forced to change things up as they spot Heidi herself walking into the scene which forces Nikki to leave (after making sure to tell Hendrix she better not forget to bring the tears). Taeler begins to get emotional as Heidi quickly wonders what’s bothering her, sparking Hendrix to say that Trina has done nothing but hurt her feelings and she just can’t take it anymore. After all, it’s certainly not easy being as stunning as Taeler is and thus she can’t have any stress affecting her good looks! Heidi agrees with her and apologizes for letting Taeler down. From there, she reveals that she’s not done with Trina just yet and she’s going to challenge the champion to another match tonight in order to get some payback. Taeler reluctantly agrees that that’s a good idea, as Heidi scurries off to find the powers that be in order to get the match signed on.

We head out to the arena as Trina and her wonderful theme song greet our eyes (and ears). She poses with her title a bit, before a perky, upbeat fun sound hits to welcome Heidi Lovelace out. Heidi begins screaming at Trina right off the bat, looking none too pleased with Trina as the bell sounds and they continue to argue. Trina shoves Lovelace back, but that does nothing but fire Heidi up! She lets out a huge spear and begins going crazy as the referee is forced to hold her back. Trina now attains the upper hand with a set of clotheslines and a bodyslam, following it up with a Samoan Drop! Before the count can be made though, out runs Taeler Hendrix and Nikki St John to cause the DQ! Together, they manage to hit a double team pedigree type move on the champion and taunt her as Heidi looks on possibly confused as to why they would interrupt her match. Taeler and Nikki don’t even seem to realize that Heidi’s out there, which may be a telling sign in the weeks to come for Lovelace (although I’m sure Taeler’s probably thinking up excuses for that right this second).

Thoughts: A pretty short week this week for OVW, but we did get some storyline continuation which is always a plus. I’m now feeling a little like this is how the storyline between Taeler and Heidi will continue to go down for a bit, with Heidi eventually overhearing one of Taeler and Nikki’s chats but playing along with it until she can exact her own measure of revenge on the both of them. Clearly as we can see from this match, Heidi gets an A+ in being able to pull off the crazed, hellbent side of herself with that sick spear to Trina and relentless beatdowns until the referee had to pull her back. I do wish the match could’ve been longer, however I like that it took a different route than just ending with a pinfall in a short time and instead incorporated Taeler and Nikki into the swing of things. They look great together, and I’m getting a big instinct that next week the two of them (well mainly Taeler) will say that they were watching the match from the back and simply couldn’t stand watching Trina have the upper hand so they had to come and put a stop to things… but they for sure knew Heidi didn’t need the help or anything. It’s going to be interesting to see where things go from here, and for how long they’re going to go with this storyline before eventually (presumably) letting Heidi in on what’s going down, I’m not too sure, but I’m in no way uninterested with any part of it so carry on!