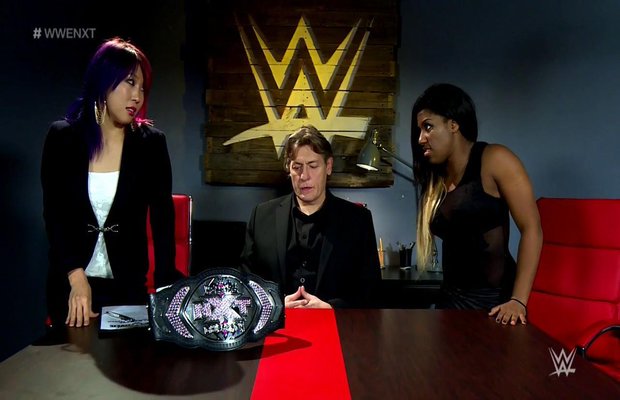 Welcome to this week’s NXT Redux! NXT is in a precarious position all across the board. With TakeOver looming in just two days does the go home show deliver or show any signs of what the focal point of the women’s division will be moving forward?

Slated for the night is a contract signing between Asuka and Ember Moon personally conducted by William Regal in his office, further shielding them from getting into an all out war before the fight truly begins this Saturday.

Let’s watch how it goes down:

Regal says he’s been looking forward to this match for a very long time, while Asuka starts to snicker. Ember says Asuka has changed and let success go to her head. She warns her that her fate is to dethrone her.

Asuka says she knows who Ember is and Ember’s still not ready. Both women get up and Ember says she’s been ready for a long time. Asuka just laughs and walks away.

Regal wishes Ember good luck as she contemplates her next move.

#SAnitY looks to silence the naysayers in a HUGE #8ManTag this Saturday at #NXTTakeOver: Orlando, streaming LIVE on @WWENetwork! #WWENXT pic.twitter.com/TkIkjN4hek

Thoughts: That’s it? That’s all this feud amounts to? A barely five minute backstage segment is all NXT can do to hype this occasion? Both competitors are undefeated! I’m at a loss for words as to what has happened to the women’s division and what has happened to NXT as a whole.

Let me just focus on the few positives here before I go off. Asuka continues to come off very well. I’m impressed with her progress with her promos. For someone who is still in the midst of learning the English language and is a pro at using body language to communicate, she’s coming into her own with her mic work.

I can’t say the same for Ember yet. I know I read some comments here excusing Ember from doing promo work because that’s not her strong suit. But, that’s not how developmental or learning and getting better at anything works. If she’s a bad promo, don’t let her off the hook, she should be practicing and getting more time with the mic so she can get better.

I feel like NXT has lost its magic. Creative has lost the concept of creating stories while they’ve been too busy putting on dream matches. Asuka’s evolution has been very fun to watch as she becomes this obsessive competitor but they’ve also been hinting at a heel turn that I’m not confident will ever come.

Ember is this mysterious warrior who’s out of this world in the ring. She can hang with all the women and she makes her opponents look great too. Her matches are always competitive and I appreciate the edge of your seat, back and forth unpredictability of it even if we know she’s primed to win.

All of this would just be better if we had a reason to care. The story basically is Asuka getting too big for NXT and is completely underestimating Ember. But, I don’t have faith that they’ll truly pull off crowning a new champion here. That continues to undercut the division and would crumble all the minimal work they’ve done with Ember’s character.

If Ember loses, then she’s just another cog in the machine. Asuka needs to be defeated. NXT has written itself into a corner with her dominance. I truly don’t know what lies ahead if Asuka wins on Saturday. We get glimpses of the promotion trying something different to only double back on tired ways. We need another “Women’s Revolution” in the division and need it fast. All the work that’s gone on to build a division that could stand on its own has been undone by months of wishy-washy writing. Asuka was right in saying, “There is no Women’s Revolution, there is only Asuka.”

Are the Iconic Duo serious heels? Who’s our main face? Where did Mandy Rose, Daria Berenato, Aliyah, and Liv Morgan disappear to? Why was Nikki’s beef with Asuka dropped? Why all the constant stop-starts? It’s shamefully lazy.

I’m also disappointed that the campaign by Billie Kay and Peyton Royce was completely dropped. They filmed that quick online segment that was uploaded this week. They could have incorporated that into this episode, possibly banning Ember’s deadly finisher for this match right before the match. That’s still something they could pull off during the TakeOver pre-show at the last minute but, NXT has squandered its goodwill and I don’t know what to believe or predict.

The last positive thing I want to say is I am excited for the eight person tag though. I’m eager to see what Ruby can do and I’d be elated if they let the women tango with the men. I’m a big supporter in allowing men and women to mingle in story lines and compete in matches together and against each other.

We have seen quite the growth with Nikki and she’s been present with Sanity on just about all NXT episodes. That’s more than I can say for the entire women’s division. Women benefit from main story lines with the men and Ruby is another that I can see growing too. We had more development for her in her exclusive YouTube promo last week than we’ve ever gotten from our number one contender.

And that’s such a missed opportunity for Ember, she deserves so much more. I have no doubt Asuka vs Ember will be a very close match that should bring the division to new heights but at this point we need a reboot to the system. Something has got to give, something has got to change.

What did you think of this week’s episode? What would you have done to have the go home show really make an impact? Do you think NXT has lost its charm? Sound off in the comments below.