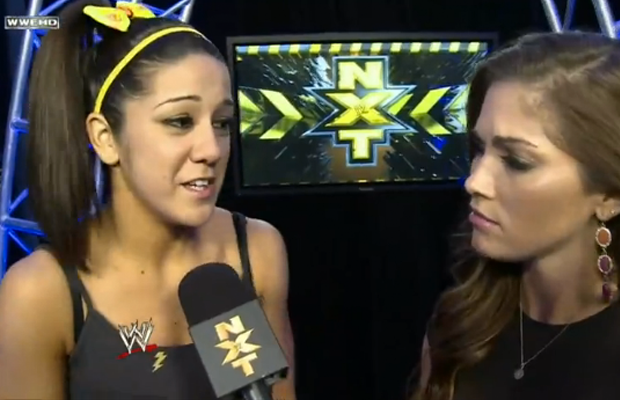 On this week’s NXT, there wasn’t much to see as Divas action goes. Still, there were a few interesting developments. Let’s dig in.

We start with Alexa Bliss, who is making her NXT debut as a ring announcer, introducing us to Colin Cassidy, who will be taking on Alexander Rusev. Lana is, of course, accompanying the Bulgarian powerhouse. Skip to 5:50 in the video below:

Rusev wins the match and clocks in a time of 5:33 for the ongoing Beat the Clock challenge.

Later, we get a glimpse of Bayley, who was double-crossed last week by her supposed best friend Charlotte. Devin steps up to interview her, asking her for her thoughts. Skip to 15:10 in the video below:

Bayley can’t understand why Charlotte would betray her – they were like Spongebob and Patrick, Tommy and Chucky! Bayley wrestled her in her first NXT match. She met her father (WOOO!). She taught her how to ride a pogo stick and did the robot with her.

Bayley says she hasn’t had the courage to confront Charlotte yet, but she might do it next week. She then tells Charlotte (via the camera) that “these two” (her fists) will do the talking. After making sure that her show of aggression didn’t frighten Devin, she invites her to do the robot with her. Devin just splits, leaving poor Bayley to do the robot alone..

Thoughts: No match, but it’s nice to see two NXT Divas make their TV debuts, even if in “secondary” positions like ring announcing and interviewing. Lana, as always, looked amazing, and Devin showed off those skills she demonstrated in that leaked promo class a few months ago.

Poor Bayley doesn’t know how to react to Charlotte’s betrayal, and it’s pretty funny to see her try to be aggressive. I’m curious to see what her idea of confronting Charlotte will look like.