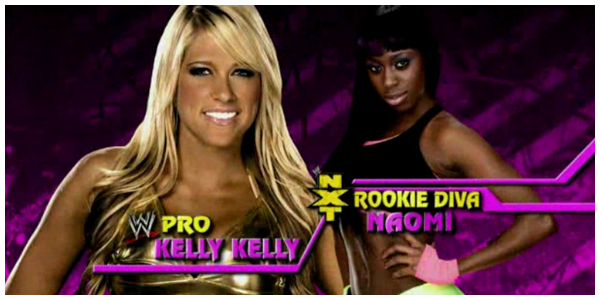 NXT season three kicks off tonight, but before that, we’re helping you get acquainted with the cast of NXT 3! In our final Rookie Spotlight, we look at Naomi Night, the first ever FCW Divas Champion, who will be paired up with Kelly Kelly.

Profile
Orlando native, Naomi Night, was signed to a developmental deal last summer, reporting to FCW right at the end of August last year. After exactly a year of training, she is about to be thrown into the spotlight on NXT. However, despite being in FCW only a year, she is perhaps the second most experienced girl in the ring (first being AJ). Naomi’s unique look, style (who else can pull off bright green leggings?) and swagger has made her a favourite with the FCW crowds. Meanwhile, her growing in-ring repertoire has caught many people’s attention too. Naomi has had good matches in FCW with the likes of Serena and AJ Lee and was crowned the first ever FCW Divas Champion earlier this year.

Check out some of her work below:

In one of her first outings on FCW TV, here is Naomi teaming up with current WWE Diva, Rosa Mendes, against AJ Lee and Courtney Taylor. Despite only being in the ring for a few months, Naomi shows some early signs of potential.

Naomi vs AJ Lee vs Savannah

Fast forward some months and here she is holding her own, and getting the win, over FCW veteran Savannah and Queen of FCW, AJ.

In the main event on FCW TV, Naomi defeats Serena in a hard-fought 10 minute bout to become the first ever FCW Divas Champion!

Naomi ranks right up there with AJ Lee as the top two contenders to win the all-Diva version of NXT. She’s already the first ever FCW Divas Champ. Can she be WWE’s next breakout Diva too? Tune in tonight!