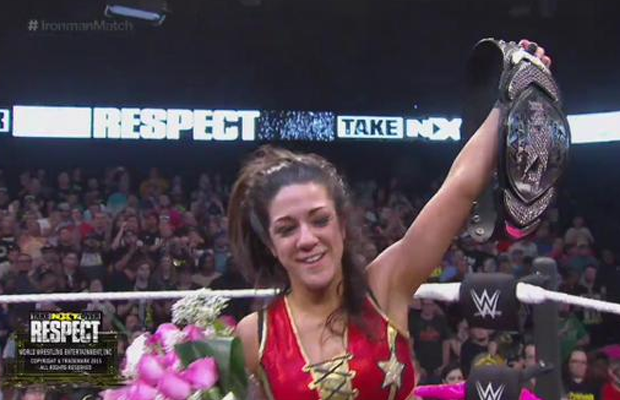 Tonight at NXT TakeOver: RESPECT, Bayley and Sasha Banks both made history, but only Bayley left with the NXT Women’s Title.

The two took part in the first Divas Iron Man match, battling for 30 minutes in the night’s main event. Move reversals, dirty tricks and battles on the outside of the ring brought the Divas to a 2-2 tie with seconds to spare in the match.

With Sasha having locked in the Bank Statement a minute away from the end, Bayley’s fate appeared to be sealed. However, against all odds, she managed to fight out of the seemingly unbreakable hold, capturing Sasha in a vicious armbar and applying pressure to Sasha’s injured hand. It was too much for the Boss to bear, and as the clocked ticked down to zero, she was forced to tap, awarding Bayley the decisive fall in the nick of time.

The Divas were joined at ringside by the entire NXT roster, as well as Charlotte, Becky Lynch, Stephanie McMahon, WWE Hall of Famer Lita, NXT Assistant Head Coach Sara Del Rey, NXT GM William Regal and Triple H. Both were awarded flower bouquets, Triple H joining Bayley in the ring to hand her the flowers and give her a congratulatory hug.