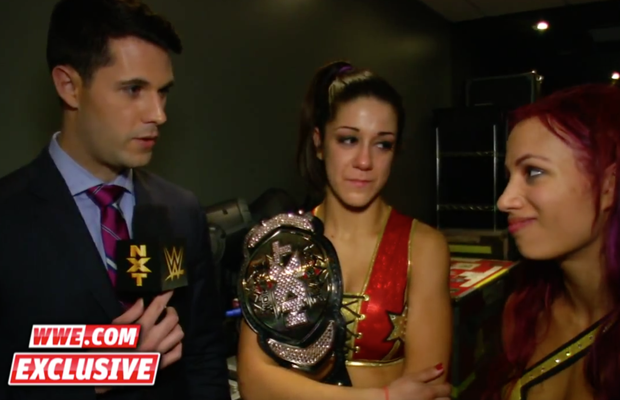 In the wake of last night’s historic NXT TakeOver: RESPECT Iron Man main event, several women commented about the enormity of the moment and what it signifies for the future of the Divas division.

Bayley dubbed Sasha the “best in the world”, expressing her shock at being able to face her so early in her career. She says it means even more personally than it does professionally, because their paths are so similar.

When asked if this match was her NXT swan song, Sasha admits that she doesn’t want to leave. She says if this is her last NXT match, she counts herself lucky to have had it with Bayley. She predicts that they’ll square off again many times in the years to come, including at WrestleMania.

Bayley recalls the main event Women’s Title match between Lita and Stephanie McMahon, crediting it with helping her realize that women can make it to the highest level. She says she, Sasha, Becky Lynch and Charlotte have fought to get the Divas back there since arriving at NXT. She says doubters should realize that it’s not stopping here: they’re going to keep breaking down boundaries.

Sasha says they’re changing the game. The Divas division is going to keep getting bigger and better. She’s excited for the future.

Divas Champion Charlotte also weighed in on the match, dubbing it her Match of the Year:

She says it gave her goosebumps to see Bayley make her entrance as NXT Women’s Champion. She explains how different it is to experience a match at ringside as opposed to in the back, the energy from the crowd making it all the more emotional.

Charlotte says she couldn’t be more proud of Bayley and Sasha: they inspire her. The moment was just “women’s wrestling” – it was “wrestling.”

Becky chimed in with her thoughts, explaining why the moment meant so much to her:

She says it means so much for this historic moment to happen to two people she’s so close with. It’s beyond belief.

Becky says it’s an incredible time for anyone coming up in wrestling, especially women. This moment isn’t just great for wrestling – it’s great for the world. She says Becky and Sasha changed the world, because they proved that women belong in the main event. This is going to continue on in both NXT and the main roster.

She recalls telling Stephanie she didn’t want the match to end. She says she doesn’t know how to moment couldn’t bring tears to your eyes.

Lastly, Stephanie McMahon gave her two cents, admitting that the match brought her to tears:

She says it was the pride of the night that brought tears to her eyes. Bayley vs. Sasha, she says, was “more than worthy” of the main event slot. She’s proud of everything to do with NXT. She claims there’s no better feeling than being in the audience and experiencing the excitement firsthand.

Stephanie says the moment went way beyond women’s wrestling and more than delivered on the hype. She says she heard chants of “Match of the Year”, “This is Awesome” and more.

As for what the future holds, Stephanie says the sky’s the limit: the only place to go is up.