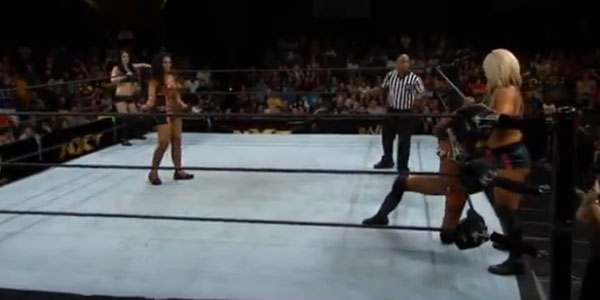 Greetings all, and welcome to another edition of the NXT Watch. Before I get started, I want to address a comment that was left last week about people (myself included) who were sort of not really fans of this new NXT due to a lack of continuity or storylines. They mentioned how since we’re getting a complete lack of Divas elsewhere, it’s better to at least have this one moment even if it doesn’t continue on rather than no moment at all, and they’re perfectly right. I kind of see the show in a different way now, so instead of faulting it, I’m going to see it in a different light because it’s at least mixing things up and providing us with some fun new matches and angles on a week to week basis.

With that being said, this week treats us to some Divas tag team action as Kaitlyn teams up with Caylee Turner to face Tamina Snuka and Paige. I’m not quite sure what disposition belongs to which team before watching it, so let’s jump right in!

We head to the arena as the tron of our enchanted raven haired lady hits, and out walks both she and Tamina Snuka! Snuka seems very into the crowd, as Paige lets out a hug to a fan with a sign for her so we will assume they are the faces this evening. Soon following, we all start to spin the bottle as Kaitlyn and Caylee Turner step out. Neither really acknowledge the fans, so I’m guessing they will be the heels. Nonetheless, the bell sounds as Caylee and Tamina start things off. Caylee toys with her a little, but they eventually lock up as the much more powerful Snuka shoves Turner back into her corner. Tag into Kaitlyn and these two now get into the swing of things as they exchange holds.

Score one for the walnut crushing thighs reference, as the crowd gets behind Tamina! Kaitlyn finally takes the control as she slams Snuka down and screams to Caylee that this is how you do it! She then gets met with a dropkick to the face, as Caylee hops down and avoids a tag! Tamina goes to town with a series of arm drags and finally takes Kaitlyn down for a two count. Tag into Paige, which pleases the crowd as she goes psycho on Kaitlyn! A headlock takeover, but Kaitlyn smartly keeps her shoulders up. She hoists Paige into the air, but the Brit flips it back over into her favor. Kaitlyn takes her down with a clothesline, but only gains a two count as she then proceeds to carry Paige into their corner and tag into Caylee.

Turner hits a few kicks and then covers after a wrist lock type move. Paige then scores with some unique roll ups, but none last long enough for a win. Paige makes the tag to Tamina and the duo takes Turner down with a double clothesline. Snuka then drops a knee and goes to bodyslam Caylee, but Turner slides out and goes for a roll up that Tamina runs forward and then kicks her in the face. Caylee ultimately scores with the roll up, but Snuka kicks out and Kaitlyn tags in. A few of her dropkicks of greatness connect for a close call, as she then slams Tamina in the corner and again tags Caylee back in. Turner with a snapmare, before reverting to a choke hold which she keeps locked on despite a “Ta-Mi-Na” chant! Finally, Snuka fights out with some elbows to the stomach and a Samoan Drop. Kaitlyn tries to will her partner on, but it’s Snuka who tags into Paige. Paige with some nice speed moves, before dropping Caylee with a fallaway slam for a one count as Kaitlyn breaks it up. Snuka goes after her, but Kaitlyn slides out of the ring and drags Tamina with her. Back inside, Paige rolls Caylee up in a small package for the victory as Kaitlyn oddly watches on. Snuka and Paige celebrate their big win, as Caylee and Kaitlyn quickly head to the back to shield themselves from the agony of a loss!

Thoughts: I have mixed feelings on the match overall, but based on two completely different reasons so let’s start with the good. I really enjoyed the action as far as ring work went. There were a few parts that was a little bit of a slip up from time to time like Caylee’s bridge pin attempt on Tamina, but she and Tamina covered it so well that had she not gone for the same roll up again, I wouldn’t have even thought anything of it. Everyone did well together in my opinion, and I loved how much time they got to put on a match since we all know time and Divas don’t really go hand in hand. To point out the thing I wasn’t crazy about though, I felt it was a little confusing at times with the whole disposition factor. I think Kaitlyn and Caylee were supposed to be heels, but not be over the top heels since Kaitlyn is a face on Raw and SmackDown, rather just kind of not acknowledge the fans or wave and smile. The match just felt like it was faces vs. indifferents, I guess. (Not sure how else to put it since I don’t even think tweener applies here.) Like for instance when Kaitlyn ran in after being tagged and took Tamina down with those set of dropkicks that I love so much, it was like something then clicked in her head like, “Oh yeah, I’m not supposed to be a face”, so she couldn’t follow up with more speed based moves. I’m not sure. I can’t really explain it well but I’m just sort of confused with how the match was set up.

I will say that I still continue to think Paige is coming up great. The crowd came alive when she got tagged in, and she also seemed to keep them invested by getting fits of clapping started even when she wasn’t involved. I felt Caylee was a little off her game since I’ve last seen her compete in FCW though, but I don’t really fault her because since that last match, FCW hasn’t given her many chances to compete and improve. She won the Divas Title and continues to ring announce or not wrestle… it’s weird. Kaitlyn and Tamina performed fine for me, but I don’t care for Kaitlyn in this heel(?) role (I guess if you could call it that). She’s so full of energy, especially when making the hot tags, and I feel like she shines more when portraying the face in matches who can run in like a child on a sugar rush with her lightning quick shoulder tackles and dropkicks. I think maybe if this was Tamina and Caylee against Kaitlyn and Paige it would’ve come off better, but that’s just my opinion.

Overall, the match was definitely refreshing. I hope we get more tag matches in the future as opposed to strictly singles because it’s fun seeing the Divas on the main roster mixing it up with some from FCW. Especially when the matches are given plenty of time as well. I just hope FCW and/or NXT start putting Caylee in a ring more because the only way she’s going to improve is by competing… not ring announcing. Looking forward to seeing what happens next as the Divas have seemed to now become a staple that are featured each and every week which means great things for us since when it began, I wasn’t sure how often they were going to be given a spot to perform. Keep this up, NXT!