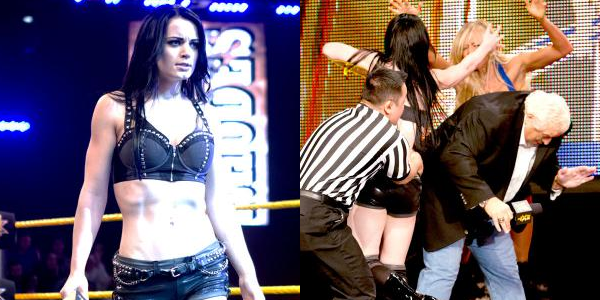 What’s up Diva fans and welcome to a double whammy edition of NXT Watch. Bobby was going to recap last week’s backstage segment-fest episode of the show but unfortunately like Enrique Iglesias’ mole, the videos had disappeared off the face of the earth. However, fear not, as I have now managed to find last week’s goings-on to present to you alongside this week’s amazing action. First of all, let’s look at the two backstage segments from last week, the first of which features Renee Young and Summer Rae, with the second featuring Paige and Sasha Banks.

Kicking off with last week’s action, we see a recap video of Summer’s attack on Paige from two weeks ago (one week ago in the context of the video) and NXT’s backstage interviewer Renee Young is standing by with Summer Rae. Renee asks Summer why she attacked Paige, to which the former/still-is (we’ll get to that on this week’s show) ring announcer explains that she has to stand in the ring week after week and act like the “cheerful, happy Diva” when infact, she is the prettiest Diva on NXT! She goes onto get a bit jealous of all the fan attention Paige gets before declaring that the ‘Anti-Diva’ is “ghastly to look at” – Summer is bringing the bitch! Summer finishes off by saying that like Paige, NXT is going to find out that “Summer School’s always in-session”. And with that finishing line, I have been won over and I’m now a fan!

Skipping slightly ahead in the video now and we see a disgruntled Paige backstage with NXT Commissioner, Dusty Rhodes, and I don;t know if it’s just me, but he definitely resembles a member of the Simpsons cast. Anyway, ‘The American Dream’ tells Paige to calm down but she is having none of it. Paige asks Dusty to do something about what Summer did to her, and if he doesn’t, she will. Paige storms off before Dusty calls her back but before Dusty can get another word in, Paige says that shes going to get Summer back in the best way she knows how; by ripping her lips off her face! Paige then says that if Dusty doesn’t give her Summer next week, there won’t even be a show next week. With her threat definitely put across, Paige begins to back off, but she bangs right into Sasha Banks and tells her to get our of her way!

Sasha asks Dusty is everything is ok, before Dusty rambles on about something I cannot decipher but then he proceeds to congratulate Sasha on her first win a few weeks back before telling her that another letter has arrived from her secret admirer. The message reads:

“Next week, is Valentines Day

And I can’t think of a better way

To show my affection than with PDA

Sasha gasps in delight before Dusty dreams out loud about PDA-ing with Paige! *vomits*

Thoughts: Week 1 was a pretty fun week, full of excellent examples of mic time from all the girls involved. After seeing Summer turn, I wasn’t sure how well she would play a heel but I thought she did fantastic at portraying someone who is obsessed with the limelight and is sick of taking a back seat. From her facial expressions to her body language, Summer had me sold and I am now definitely a fan.

As for Paige, she also did very well in her backstage segment. I love how she is only looking out for herself and didn’t care about the way she spoke to an authority figure in Dusty, Sasha and she definitely doesn’t care about stopping an entire NXT broadcast. Passionate work from Paige, and being honest, I thought it seemed a little forced at times, but nevertheless, I enjoyed her work and after all, this is wrestling, it’s over-the-top and not real! What you didn’t know it was scripted? Oh…

Finally onto Sasha, who I definitely believe will be Fandango’s right hand woman! From the vignettes so far, Fandango seems to be a charmer and Sasha did accompany him once or twice at live events as a valet, so you never know. Sasha’s reaction was pretty believable, albeit she did seem a bit unperturbed about PDA, and everyone knows that a public display of affection is the worst! And with that… oh wait, we’re not finished yet. Onto this week!

Before the point that this video has started, Summer Rae is once again ring announcing but thankfully, the video creator has skipped the majority of the entrances of these two jobbers that even Bobby probably doesn’t care about (and he loves everyone on NXT). As Jobber B is entering Full Sail, out storms Paige from behind him and she has those evil eyes set on Summer! Paige blasts through the ring at Summer, but Paige is the bronchitis to Summer’s Sweet Brown and Summer ain’t got time for that. Paige chases after her attacker as NXT’s (in my opinion) appalling announcer Tony Dawson nearly ruins the segment with his commentary. Paige gets back in the ring and grabs a mic and says that unless Summer gets back in the ring, the show is being held hostage! The bearded jobber then tries to reason with Paige but she just slaps the hair off his face and screams at him to get out of her ring – MARK OUT MOMENT!

The addictive theme of Dusty Rhodes then hits (so what that I like it!) and he demands that Paige get out of the ring immediately. Paige declares that she isn’t going anywhere but before referees can try and get her out, Summer charges onto the stage and tells Paige that she is the “first lady of NXT” and will not be interrupted. Paige rushes up the ramp and tries to hit Summer, who is using Dusty Rhodes as a shield. It seemed to be a pretty effective shield as Paige looks to have injured her arm in the process. After a bit of screaming here and a bit of hair-pulling there, the NXT officials manage to pull the two apart.

The video has then conveniently cut to Summer’s entrance for the match (hooray for ignoring Mr. Dawson) and Summer struts her stuff on the way to the ring. Her entrance theme is pretty cool and her entrance is pretty unique, so props to Summer for that. Summer’s sultry club beat dies down as Paige’s rock anthem begins to play and the audience go crazy. Paige has a “I can’t wait to get my hands on you” look on her face, and trust me Paige, I can’t wait for you to get your hands… or hand (her arm is injured) on Summer either! As Paige takes off her jacket, it’s clear to see that she has her arm taped-up, but will that hinder her enough to lose for the first time in a long time?

The bell sounds and Paige guns right for Summer and Lou Thesz Presses her to the ground! Paige is writhing at Summer’s face (which reminds me, does anyone think she looks a bit like the singer Anastacia?) As I begin to hum Anastacia’s hit song ‘I’m Outta Love’, the ref pulls Paige off of Summer. As Paige is being restricted, Summer uses her long legs to kick right at Paige’s injured arm. Following a jumping armbar takedown, Summer manages to get a two count and she is undeterred by Paige kicking out, as she starts to pull the Anti-Diva’s hair.

Summer starts to trash talk the Norwich native and drops her knees right across Paige’s injured arm. ‘Hell in Boots’ then begins to experience hell on earth as Summer drops a leg on Paige’s arm before locking in a slick looking short-arm scissors. Although Paige is screaming in pain, she somehow manages to backward roll out of Summer’s submission and she gets a two count. The ‘Enchanting Raven Haired Lady’ then wallops Summer with her patented thrust kick to the stomach before tossing Summer across the ring by the hair. She then starts stomping a mudhole right into Summer, who rolls onto the apron.

Paige’s anger then leads her to try and follow Summer to the outside but Ms. Rae is definitely more savvy than we all think, and she wrenches Paige’s injured shoulder over the middle rope. Summer then gets back into the ring, hits a pretty sloppy looking Roundhouse Kick and gets the win. Paige’s winning streak has finally came to an end, and a new wrestling Diva is well and truly on the scene. Also, speaking of new Divas, after the match, Dani debuts and presents Sasha Banks with another letter from the secret admirer. The letter reads that Sasha will find out the identity of the writer next week! Even though Dani wasn’t named on screen, we’ll name you here Dani. You did well and you looked hot!

Thoughts: This whole episode was pretty much faultless. Whilst it wasn’t groundbreaking, it was exciting, entertaining and an example of how WWE should treat their main roster Divas, as opposed to just sticking them in segments on WWE Active. The show started amazingly with Paige representing her character brilliantly by attempting to hold NXT hostage. She even got some of the male Superstars to get out the ring, which was awesome. The brawl was also very fun and the introduction of an injury angle was solid story-telling; it allowed Paige to lose but not without good reason. She is hurt and Summer’s played the perfectly bitchy heel by taking advantage of the injury in the ring.

Before I get onto the match, I want to comment on Summer’s entrance. At times, it’s hard to see someone stand out and manage to create their own unique entrance but I definitely think Summer did that. Whilst the hair flips are obviously doing to be compared to Maryse, I thought Summer’s pose on the ramp and on the top rope were both very unique and played into her character. As for Paige’s entrance, her expression towards Summer was great, and who doesn’ t love her scream? I love it, hence why Paige is on my laptop background, phone background, Twitter cover photo… ok you get it, I’m a massive fan!

As for the match, whilst it was short, it was solid, and the length of the match made sense due to Paige being unable to carry on due to such a nasty injury. Summer was more than competent in the ring and Paige’s selling was excellent. There was a lot of hype going into the match and it certainly did not disappoint! And with that, stay tuned, Jack will be back!