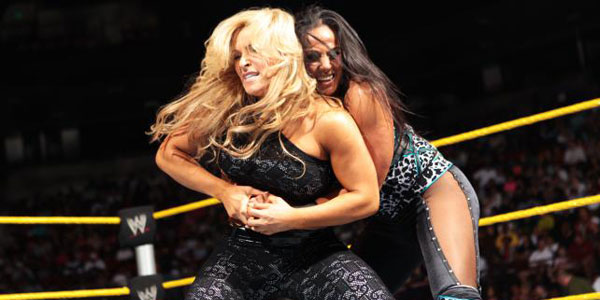 Hello there, and welcome to another edition of your NXT/Superstars V2.0 Watch. Before we get started, I’m going to warn you all that I’m not in the best of moods, and since NXT no longer cheers me up as much as it used to, this recap may not be the perky ball of sunshine it usually is. So, now that that’s out of the way, let’s get started as we delve into this week’s show that was only (gasp) FIVE hours late this week until it became available on Hulu of all places. (You can’t see me right now, but I’m applauding that we even got a show at all!) Like the past few weeks, NXT is one of the only (and this week THE only) show in the company where you can see the Divas wrestle. This week, the land of the yellow ropes provides us a match that pits two members of legendary families against each other as Tamina Snuka takes on Natalya. Given that the video comes to about ten minutes long, I’m expecting that the two actually get a good length to work with, so why don’t we get started before I drift off into watching another episode of Mad Men.

We return from a commercial break to hear the beautiful anthem of not only the Divas division, but of life itself, in “TA-MEE-NA” (duh duh duh duh). Snuka walks out and poses on the ramp, before skipping into the ring and slapping some hands of her wonderful fans. Out next comes Natalya, who looks AWESOME in her new gear. This woman can do no wrong in my book anyways, but I think she might have my favorite look in the division now. (I love capes, sue me.) Natalya sarcastically waves at Tammy Snooks, as I will refer to her from now on so that we get a little Maxine nod in here through our first Maxine-less episode of NXT since her return. (And yes, I’m sure someone will point out Maxine never called her Snooks, so this is my own addition to the hard work our Queen put in before the show was stupidly altered to what it is now.)

Okay, back to the ring, Natalya steps inside as she and Tammy Snooks stare off a bit before the bell rings. Nattie removes her Black Widow-esque cape, with both ladies circling the ring until they lock up. Natalya scores with a waist lock, but Tamina reverses. Nattie takes the control once again, as Tamina tries to shove her off to no avail. A side headlock takedown by Natalya, which spies Tamina counter into a leg scissors that Miss Neidhart breaks out of. Tammy takes Natalya down with a side headlock of her own, and now Natalya applies the leg scissors that Snuka breaks out of. Neidhart scores with a big smack to the face and then takes Tammy down with a shoulder tackle. Irish whip follows, with Tamina leapfrogging over her opponent and chopping her down to the canvas.

Tammy Snooks hits a huge dropkick, but only gets a two count, as she is then sent into the corner. She looks to jump over Natalya, but the Neidhart doesn’t follow through and instead smacks her in the face and shoves her back down. Natalya sits on Tammy Snooks for just a one count, before stomping on the Island hand and taunting Tamina. Nattie takes her down and proceeds to kick Snuka in the back. Suplex… SCORES, as Natalya garners a two count with that vicious maneuver. She goes for another, but Tamina counters into a small package for a near fall. Both women get up and Nattie takes control with a huge spinning clothesline to garner a two count. From there, Natalya locks in her beautiful modified abdominal stretch and screams out “I HATE YOU” in brilliant fashion.

Tamina finally fights out and hits a nice hip toss, as both women are down. Natalya goes for a running splash, but Tamina takes the beautiful blonde down with some chops and a running forearm to the face for a near fall. Tamina hits a bodyslam, before climbing to the top rope and… stepping down as Nattie rolls out of the way and kicks her in the stomach. Natalya goes for the sharpshooter, but Tamina kicks Nattie back and outside the ring. Natalya climbs back in the ring, but gets met with a huge Samoan Drop as our Island Goddess Tammy Snooks once again ascends to the top rope. This time, she leaps off and NAILS it. One… Two… Three! Tammy Snooks emerges victorious.

Thoughts: I liked this week’s match a lot and thought it was easily the most solid that we’ve seen in some time from the Divas. Of course, having Natalya involved will do that to pretty much any bout the women compete in since she is who I consider to be the best wrestler in the diivsion. Tamina, I feel, works much better when she is against people that are more known for their wrestling like a Beth Phoenix or a Natalya, and tonight was no exception as she was able to keep up with Nattie and work a pretty fun match. There wasn’t really much we haven’t seen before, but I’d rather see that happen than a bunch of new moves that don’t come off well so I enjoyed this match honestly as much as I could enjoy one on the new and unimproved NXT.

On another note, I understand the changes affected everything the show was doing, but even now I still don’t really get it. Last week we were teased with Maxine and Kaitlyn, and this week it seemed more like Tamina was the focus. I don’t have a problem with either situation really since I like all three (even though I’m pulling for a Maxine/Kaitlyn submission match to take place on the last episode), but I wish there was at least some type of focus instead of becoming another Superstars where the spotlight shifts every week to whoever isn’t used on the main show (only now that’s every Diva employed except my beloved AJ). It’s whatever, though. I’m pretty much just going to forget the last few weeks and any that follow exist when it comes to NXT Redemption (not in a mean way to the matches that take place now, just in a “I want to remember it for how it was before a few weeks ago” way)… so honestly (and unfortunately), we’re just treading water until the FCW version starts up. Like I mentioned last week, I will have a large… and I mean large discussion about my full thoughts regarding this season and how it was “handled” whenever the final episode is announced. Until then, enjoy these random match recaps!