NXT Watch (May 8th, 2013): Bayley Looks to Outperform Paige, but Summer School May Not Be Over Just Yet 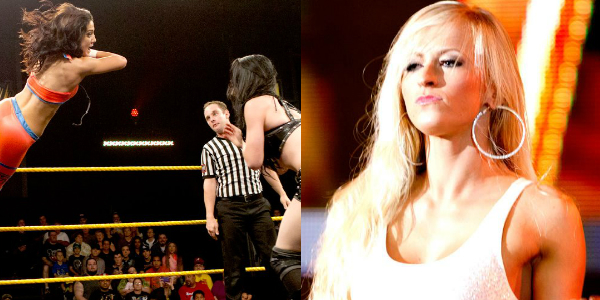 Hi everyone. Tonight we’ve got Paige vs. Bayley. Let’s get reduxing.

…okay, don’t tell me you actually thought I could do an opening as concise and to the point as that without talking on and on. So tonight on NXT, fresh off what may or may not be the blow off match to the Paige/Summer feud, we’ve got some Divas in action as the one of those two with raven hair squares off against a Diva who hasn’t gotten to make her mark quite just yet in Bayley. That’s right, it’s Bayley facing off with Paige, and who knows? Perhaps this could be the big victory Bayley’s been looking for to establish herself in the division? We also have an appearance by Summer Rae somewhere in the episode as well, but we’ll get to that later. First up, let’s get recapping on some action.

I already see Bayley’s orange gear in the ring which bums me out from again not getting to see her entrance, but never fear as out comes Paige and her rockish theme to save the day. The bell sounds as both ladies lock up and Bayley backs Paige into a corner. Paige doesn’t even rest for a moment though, as she now applies a wristlock that Bayley counters into one of her own. A nice rolling leap up by Paige, who headbutts Bayley perhaps all the way back to California and gets the fans applauding her in the process. Shades of last week now as Bayley gets sent into the ropes and bounced off, but only for a one count. Some nice maneuvers as Paige remains in control, but Bayley pushes her off the ropes and nicely drops her by the hair.

She rams Paige into the turnbuckle and starts choking her with her boot. Following a slam, she covers Paige but only for a two count. A submission locked in, as the crowd fires up behind Paige to no avail just yet. Bayley up to the second rope and hits an awesome elbow, again for a near fall. She tries to keep the momentum with a nice suplex, and again can not attain the three count. Bayley scores with a knee drop and goes for a bodyslam, but Paige counters out into a fisherman suplex! Paige now ducks a clothesline and mounts her comeback as she tosses Bayley around by the hair and nails a few insanely cool knees to the chest that causes Bayley to land in the corner which everyone should fear when in the ring with Paige as it signals those painful looking boots. A sharp kick to the abdomen followed up by the Paige Turner secures Paige the victory! As the referee raises her hand though, in runs Summer Rae who ambushes our fair skinned Diva from behind and struts off like a boss (which as always will be the last time I use that word as it’s too cool for someone of my un-coolness).

Thoughts: I actually really enjoyed the match between Bayley and Paige. They both look so competent in the ring and never seem confused or lost with what to do next, which overall helps the bout come off like a strong, hard fought one. Paige’s win wasn’t as squash-y as I thought it would be going in as we got that part in the middle where Bayley was in control, and overall it felt even and not too short for me. I will say though that I want something put into Bayley. She’s got the skills down and she looks great, but I don’t even know what disposition she is since we don’t really see her entrances or any characteristics throughout the match to indicate it. A backstage segment would be great, and you could even start up a feud with maybe Audrey or Sasha since they both seem to be finished for the time being when it comes to working with each other.

Summer and Paige’s feud continuing gives me mixed feelings. I felt like last week was the perfect ending and I don’t really know what more they can establish unless they’re looking to do the rubber match since Summer’s beat Paige and Paige’s beat Summer to truly see who the top female is. I think the feud could go on if they do a bit more when it comes to segments aside from just interviews and attacks from behind, but since this is NXT/developmental I’m not sure if they really go for the all out stories that much. We had the secret admirer bit, and I really loved that, but we’ve got it going down on Raw now so it can’t happen again, especially since the Raw one is taking place so quickly after the NXT version. I’d love to see Summer maybe do one of those bits where she ambushes Paige and then spraypaints on her like Trish did to Christy… although I’m not sure what insult could be written that doesn’t violate the PG barrier. Anyways, I’m probably going way too far into this so let me stop for now. Until next week — peace!