NXT Watch (November 22nd, 2012): Alicia Fox and Paige Duke it Out, But Who Emerges with a Victory? 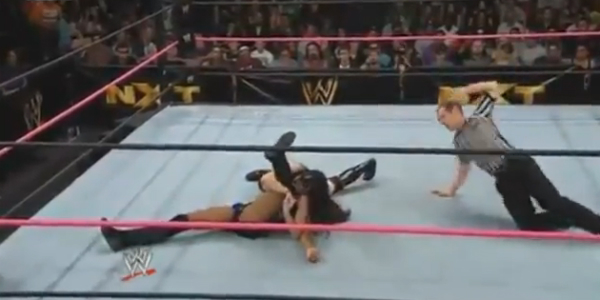 Hola everyone, and let me introduce you to this week’s NXT Watch. It’s a match up we’ve seen before, but one that has certainly delivered before as well, in that of NXT standout, Paige, taking on the leggy main roster Diva, Alicia Fox. Which will leave tonight as the victor? To find out, please scroll on down and check out the match!

Following the entrances of the quintessential Diva and the Anti-Diva, the bell sounds as this match gets underway. Fans continue to show their intense support of Paige, as the two ladies lock up and look to gain the advantage. Paige scores with a pretty sick armbar takedown, and an equally sick dropkick. Paige with a monkey flip, but Alicia Fox flips out and lands on her feet! Fox applies a waist lock, but Paige tries to fight out. Some sort of twisting bodyslam that is badly edited, but Alicia hits a legdrop and then continues to keep the momentum in her favor by dragging Paige to both corners and slamming her head into the turnbuckle.

Awesome northern lights suplex, but just for a brief count, as Alicia Fox now applies a new submission called The Hangover, but Paige does not give up. Fox reverts to grabbing the hair, however, as the referee counts to five, she lets go and slams Paige into the canvas. Fox now goes for a cover after a few more slams, but Paige kicks out and then attempts a small package. Alicia Fox kicks out though, and now begins to taunt Paige. She tries to Irish whip Paige into the ropes, but the enchanted raven haired lady hits a sharp kick to the midsection. Paige follows it up with what looks to be the set up for Fox’s tilt-a-whirl backbreaker, only Paige falls on top of her and hooks the leg for the one… two… nada!

The trade shots, but Paige takes control with a suplex and then throws Fox into the corner. She charges, but Alicia hops into a split position and executes a sunset flip for a near fall. Not long after that, Alicia gets set up for Paige’s new swinging suplex finisher that I believe she calls the Paige Turner and that seals the fate of the match to the fan favorite, Paige!

Thoughts: Honestly, I don’t know what else to say that I don’t say for pretty much all the NXT matches that take place. I enjoy them, but I do wish they would start incorporating some storylines into the show for the females. It’s been going on for a few months now, and while I don’t mind the strictly matches formula they have set for the Divas, it sort of feels like something is missing to me in the form of a title or at least a feud that could be used to set up the introduction of a title. Paige and Alicia put on a fine match together, but I don’t really know what else to say about it to have it stick out from the rest of the NXT matches I’ve reviewed before if that makes sense. I’m grateful that they’re getting a chance to actually wrestle lengthy matches, and it’s fun seeing the developmental Divas mix it up with some on the main roster, but I think it’s time for a feud to develop between at least two of the Divas in developmental to shake things up a bit.